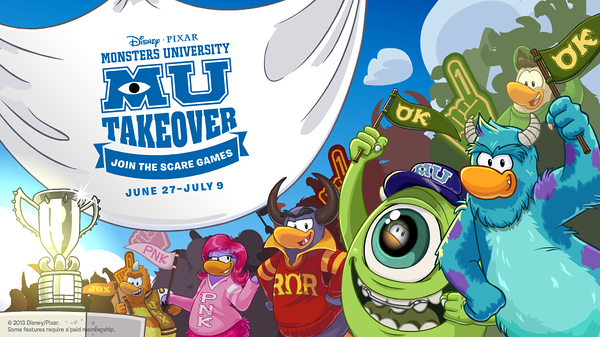 Two scare-filled weeks of fun are coming to Disney’s Club Penguin, the #1 virtual world for kids! For the first time ever. Club Penguin is partnering with Disney/Pixar to throw the Monsters University Takeover Event! Starting today and running through July 9, millions of penguin players can enroll in Monsters University on Club Penguin Island and pledge three different rival fraternities and one sorority to compete in the Scare Games.

During the Disney/Pixar “Monsters University” Takeover event members will be able to dress up as their favorite characters from “Monsters University,” like Mike and Sulley. In their monstrous disguises, members can test out their roar and creep around campus to earn their own scare points. The new terror-ific event will also feature an all-new mini-game where players can practice their best scare tactics.

While competing in the Scare Games by earning scare points for their fraternity or sorority, members will be able to dress up as their favorite characters from the Disney/Pixar film “Monsters University,” like Mike and Sulley. In their monstrous disguises, members can test out their roar and creep around campus to earn their own scare points. On July 6, the winning fraternity or sorority will be announced, and all players can collect the Scare Games Trophy. Additionally, the Monsters University amphitheater will be decorated in the winning team’s colors. 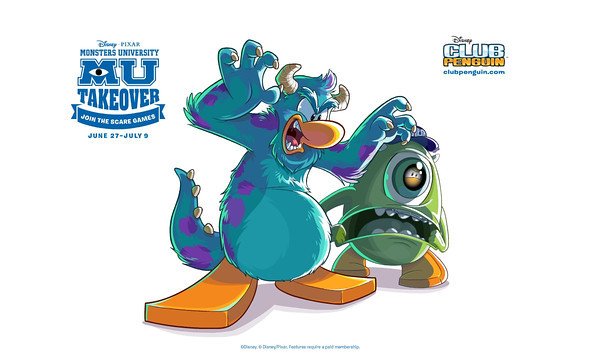 During the “Monsters University” Takeover event on Club Penguin Island:

· Everyone can fill up their scare canister with scare points in an all-new mini-game where players practice their best scare tactics.

· All players can collect fraternity and sorority hats to show their pride when they join a team and can also earn monster accessories for their epic roars. Members will receive the hats and accessories, plus the ability to purchase exclusive “Monsters University” costumes with their virtual coins.

· New igloo items are available for members to buy in the Furniture Catalog. Some featured items include the Scoreboard, Scare Canister, Ping-Pong Table, Lounge Chair, Archway and more.