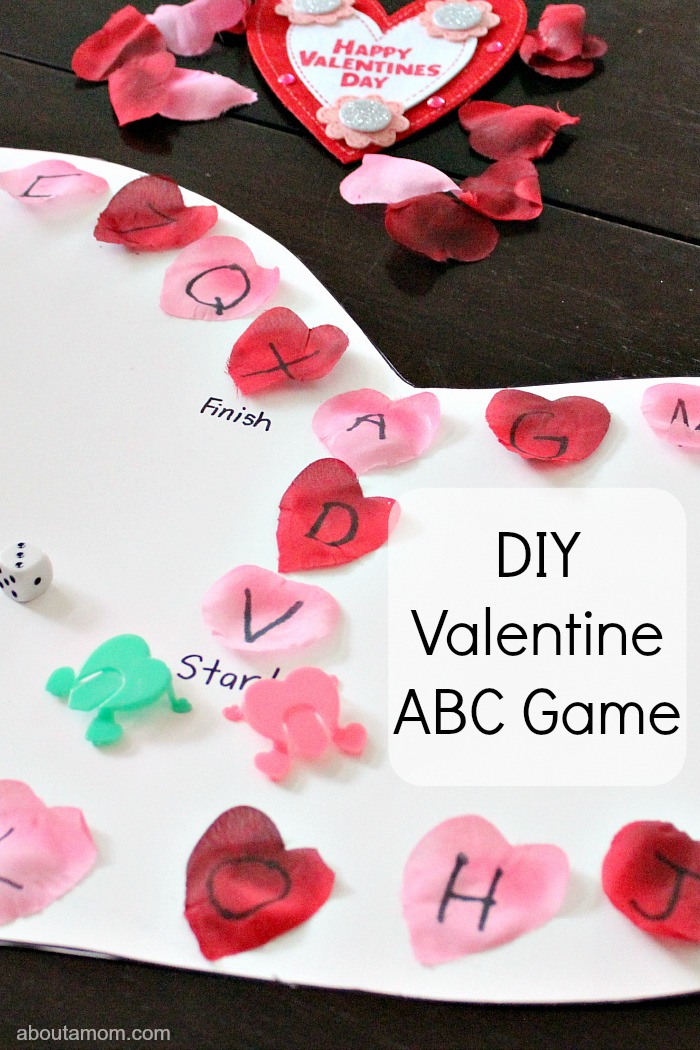 I HEART Valentine activities!  Each year when my kids and I get out our Valentine box of activities and decor we are gitty!  We LOVE the month of February.  We especially enjoy this board game that we made together for ABC practice (you could even create one  that focuses on number sense).  Here are my tips on how to create your own DIY Valentine ABC Game!

We use poster board, a sharpie marker and silk heart shaped rose petals from the dollar store. 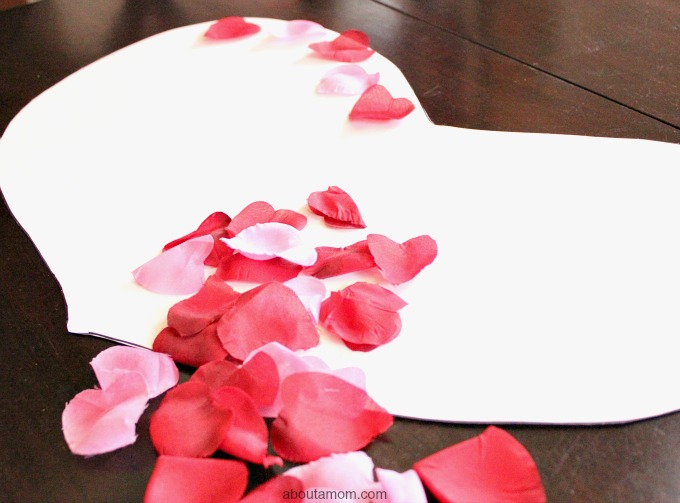 We cut a large heart out of the poster board. 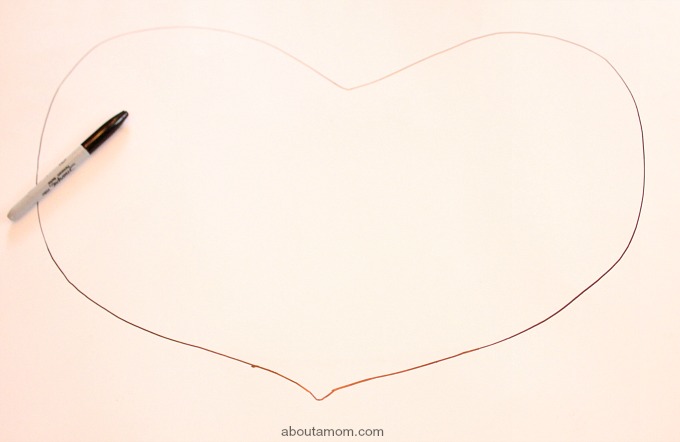 We then laid the heart on a flat surface for assembly.  We had to think about the layout of our game.  The kids decided they wanted to make a start/finish line.  We glued 26 rose petals along the outer edge of the heart game board. 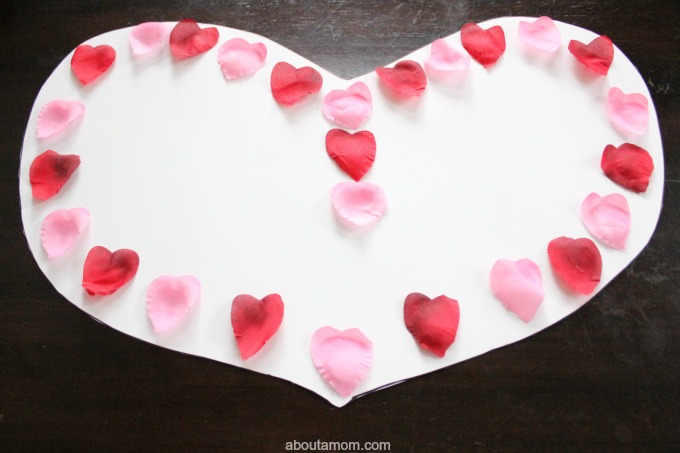 We decided to “scramble” up the letters of the alphabet.  Using a sharpie, I wrote one letter on each petal, out of order, until all letters were used up. 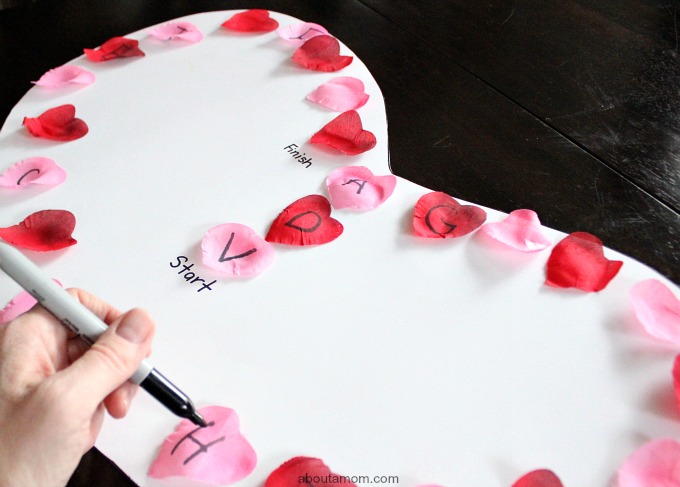 It took just a few minutes to assemble and then we took it to our local copy store to laminate (not required but will last for years to come).  We really enjoy playing this game and we even came up with a few variations of play!

Begin at start and go clockwise around the game board and work toward the finish line.  Player #1 rolls a die and then moves their game piece (we use candy hearts) that many spaces.  Player #1 names the letter/sound that they landed on and get to stay on that space if they answer correctly.  If player #1 doesn’t know the letter/sound then they must go back to their previous space.  They will have another chance to move forward on their next turn.  Player #2 then rolls the die and continues with their turn just as player #1 did.  The first player to the finish line wins.

Using a deck of ABC flashcards, player #1 picks a card from the deck and names the letter/sound on the card.  If they are correct, then they “cover up” that letter on the game board with a game piece.  We use these cute heart game pieces that we found at the dollar store as our player game pieces (each player chooses one color for the entire game). 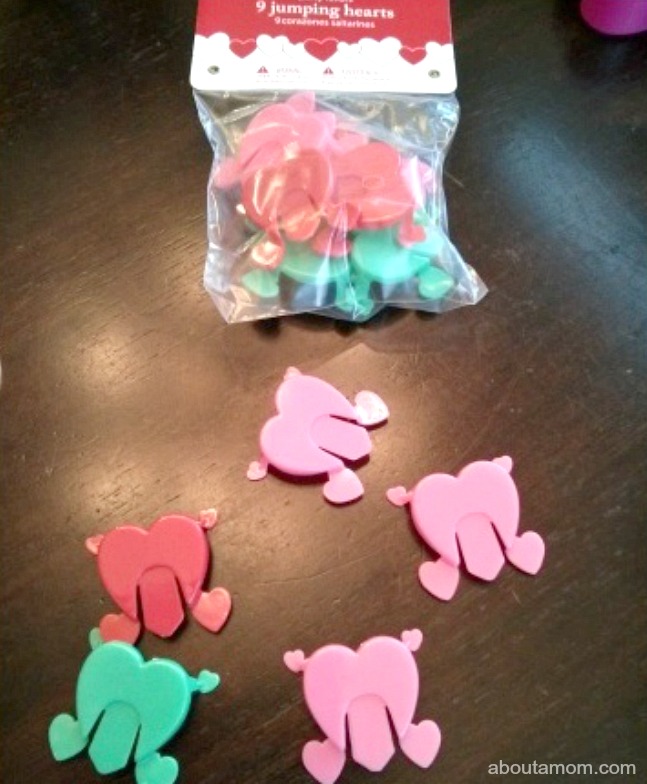 If a player doesn’t know the letter/sound on the card that he/she has drawn, then that player misses his/her turn and that flashcard is then placed back into the deck.  Player #2 then proceeds with his/her turn by choosing an ABC card from the deck of cards.  Player #2 then must name the letter on their card chosen from the deck of cards.  If Player #2 names the letter/sound, then he/she gets to find that letter on the game board and cover it up with their own colored game piece.  The game continues until the all letters have been “covered up” on the heart game board.  Once the game board is covered then each player counts his/her game pieces and the player with the most pieces on the game board is the winner. 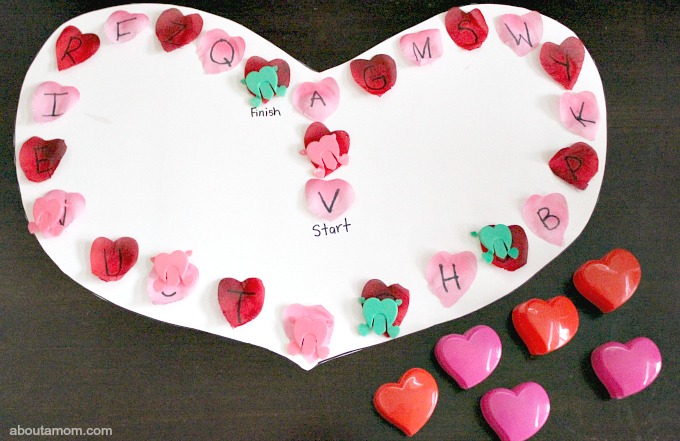 Using these super cute plastic heart boxes {dollar store}, remove the lid and hide one letter of the alphabet inside until you fill 26 hearts (simply write a letter on a scrap piece of paper and place inside the box). 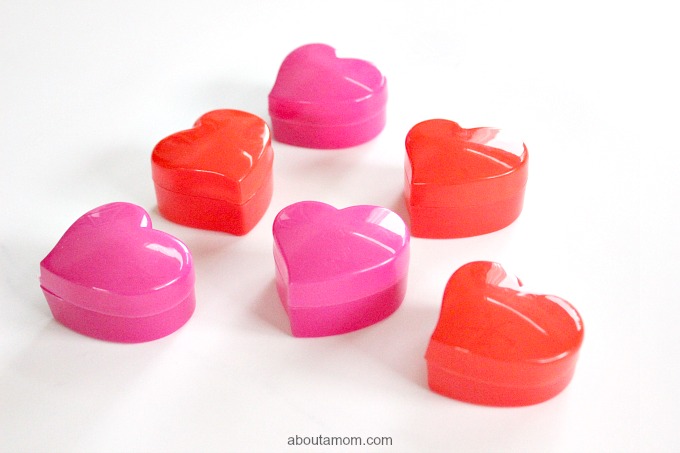 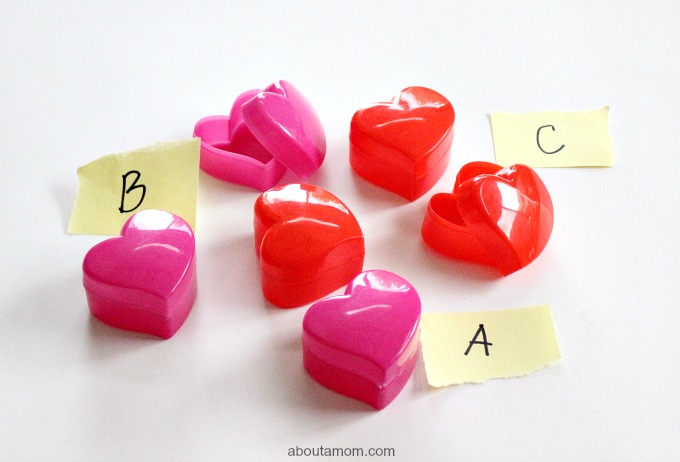 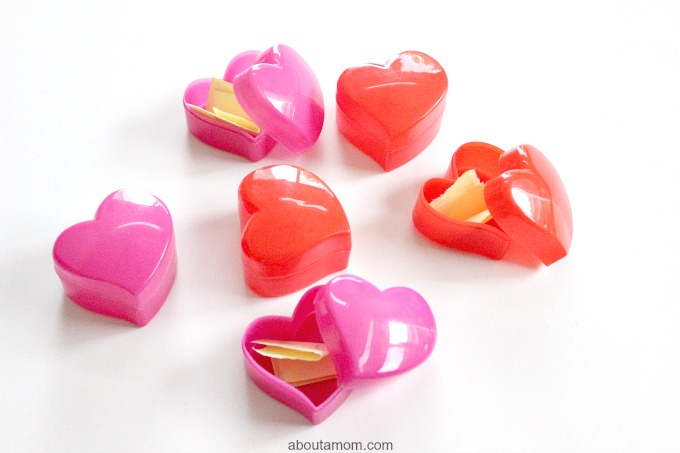 As a dual player game, player #1 would choose a heart box, open the lid to reveal the letter and then say the letter/sound.  If they are correct, then they get to “cover up” that letter on the heart game board with one of their game pieces (each player chooses one color for their game pieces for the entire game).  If player #1 answers incorrectly, then they miss their turn and the letter goes back in the box.  Player #2 proceeds, as player #1 did.  The game continues until all letters have been picked from the heart boxes and all letters have been covered on the game board.  Each player then adds up how many letters they covered up on the game board.  The player that covered up the most letters is the winner.  *If this is a single player game then the object is to cover the game board with your game pieces, the same way that dual players would, while practicing your letter/sounds (If a single player is struggling with a letter, then they can ask for “help” with that letter.  They must still place the letter back into the heart and the next time they pick that letter, the hope is that they will now know the name/sound due to the “help” they received the first time they picked that heart)*  Tip:  I like to use this adorable dollar store basket to place all the heart boxes inside of.  Each time a player takes a turn they simply pull a heart box out of the basket. 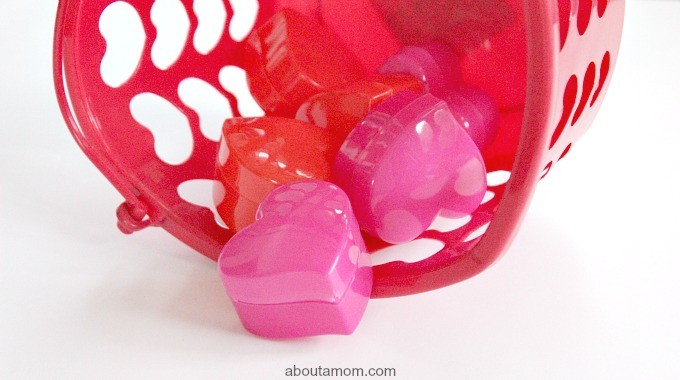 These games have brought our family hours of joy and ABC practice!

Have a wonderful Valentine’s Day and I hope that these tips inspire you to get “hands on” with your kiddos in a creative, fun way this February!

Written by About a Mom contributor, Mandy Mae. Mandy is a wife, mother, teacher, and frugal-DIY-enthusiast. Hoping to inspire mothers to take action in making a positive influence in the lives of their children with simple DIY, crafting, thrifting, and teaching projects. You can see more from Mandy Mae on her blog MissMaesDays.com.