DreamWorks Real Steel - About a Mom ↑

I am super excited about DreamWorks new futuristic action drama Real Steel. It looks like a movie that the whole family will enjoy. It stars Hugh Jackman for mom and cool, high-tech robot boxers for the kids. I am a huge fan of Hugh Jackman movies and Real Steal looks to be no exception. 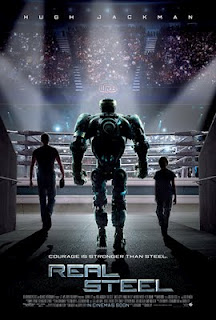 Real Steal is directed by Shawn Levy, who also directed hits such as Night at the Museum, Cheaper By the Dozen, and The Pink Panther.

Synopsis:
It’s 2020 and Robo Boxing is the biggest sport in the world. Charlie Keaton (Hugh Jackman) is a former boxer turned fight promoter of robot boxers. He is put in a situation where he has custody of his 11-year old son Max (Dakota Goyo), at a time when he is at rock bottom. Charlie (Hugh Jackman) gets one last shot at a comeback when he and Max (Dakota Goyo) build and train the perfect contender for the new high-tech sport of Robo Boxing.