Jennifer Garner stars in the upcoming movie, Nine Lives, in theaters on August 5. A movie she describes as a fun family experience. Last week, I had the opportunity to hop on a call with a few other bloggers to chat with her about Nine Lives. My family loves a good comedy, and knowing that she is a mom of three, I was eager to hear her thoughts about this family film. 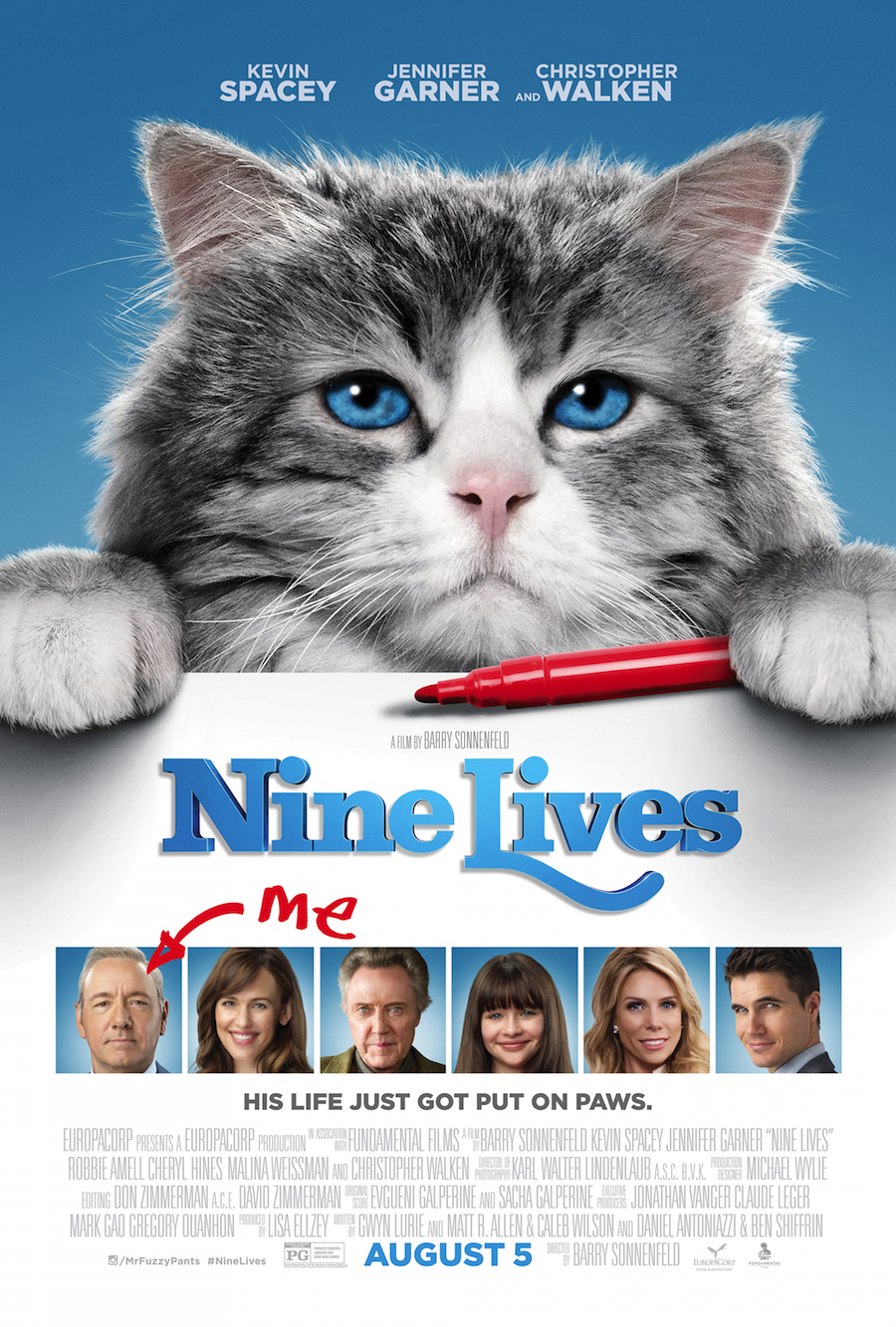 In Nine Lives, Jennifer Garner plays the role of, Lara. The wife to daredevil billionaire and often absentee parent, Tom Brand (Kevin Spacey). Tom’s workaholic lifestyle has disconnected him from his wife and his adoring daughter Rebecca (Malina Weissman).

Rebecca’s 11th birthday is here, and she wants the gift she wants every year, a cat. Tom hates cats, but he is without a gift and time is running out. His GPS directs him to a mystical pet store brimming with odd and exotic cats- where the store’s eccentric owner- Felix Perkins (Christopher Walken), presents him with a majestic tomcat, named Mr. Fuzzypants.

En route to present his daughter with her dream pet, a bizarre turn of events finds Tom trapped inside the body of Mr. Fuzzypants. Adopted by his own family, he begins to experience what life is truly like for the family pet, and as a cat, Tom begins to see his family and his life through a new and unexpected perspective. Meanwhile, his family adjusts to life with an odd and stubborn cat, and his son David (Robbie Amell), steps up in ways Tom never expected.

If any hope exists of returning to his family as the husband and father they deserve, Tom will have to learn why he has been placed in this peculiar situation and the great lengths he must go to earn back his human existence. 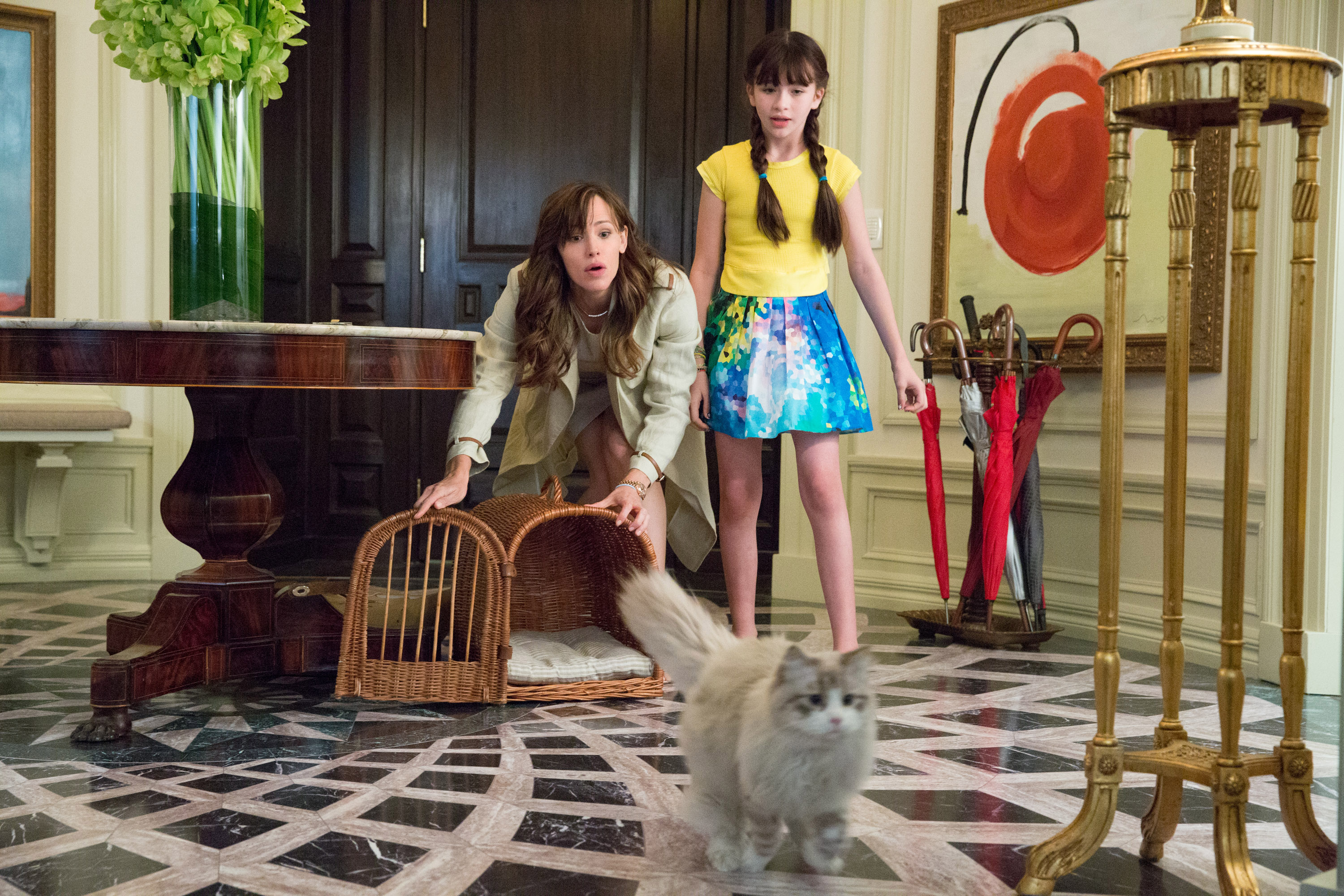 I watched an early screener of Nine Lives with my seven year old and we both thoroughly enjoyed it. The movie was incredibly funny, but also had some great takeaways. More on that later when I share my Nine Lives movie review with you. During the interview, Jennifer, shared her thoughts on the movie as a whole.

“This movie proves to be a fun family experience. It’s not an animated movie. It’s not a realistic movie. It’s just a fun family, all ages, kind of silly movie. I hope kids are introduced to the brilliance of Christopher Walken and that all of Kevin Spacey’s fans have fun seeing President Underwood as a cat.” Jennifer also shared what parts of the finished movie had her laughing the most.

“Kevin’s voiceover as the cat is so funny to me, just his kind of dry sense of humor. And also, Christopher Walken is so quiet when you’re acting with him. You can’t really tell what he’s doing. And when he turns around and whispers to the cat, he’s like, “Listen, Fuzzypants.” That really had me laughing. So, I would say those are the things that made me laugh after the fact just watching the film.”

Jennifer told me how much fun it was to work with co-stars Cheryl Hines, Christopher Walken, Kevin Spacey, and young actress Malina Weissman. Also, what a different experience it was for her to work with cats on this film. 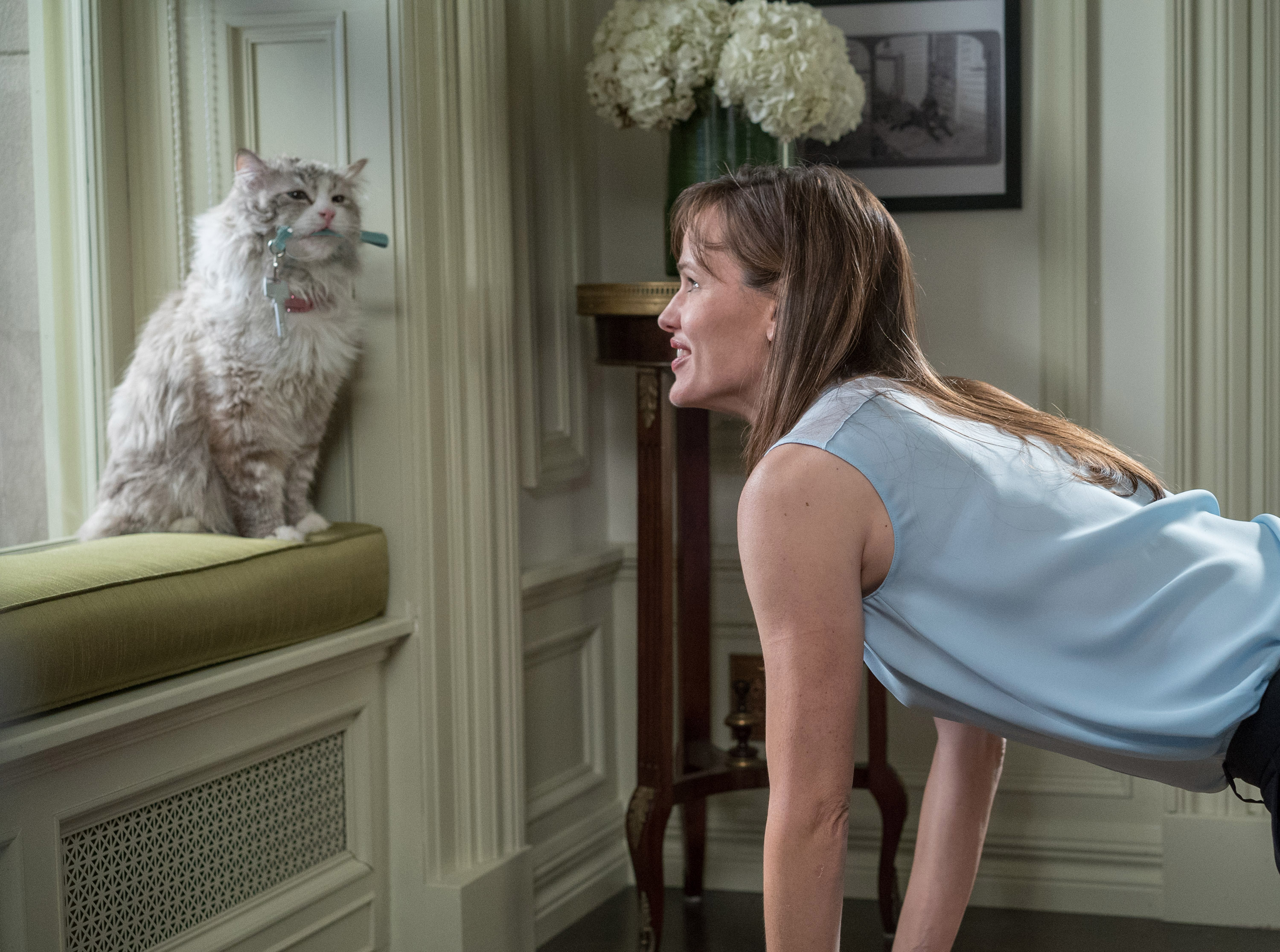 According to Jennifer, the cats you see in this movie are real professionals. As someone who likes to go into everything prepared, she thought she would spend some time getting to know the cat. It turned out to be completely different. The cat handlers explained that “they’re camera cats. When they’re at work, they’re at work. They get petted by us when they’re at home. So, you can pet them in the scene, but otherwise, they need to stay focused on us. The cats are the center of the universe when they’re on set. I’d be getting a touch up, and they’d say, “Jennifer, Fuzzypants is ready!” And I’d say, “Okay, I’ll be right there!” And we’d all hurry because Fuzzypants was in a better mood.”

Although these cats were professionals, Jennifer said there were times when she referred to Mr. Fuzzypants as Mr. Diva Pants or Mr. Cranky Pants. 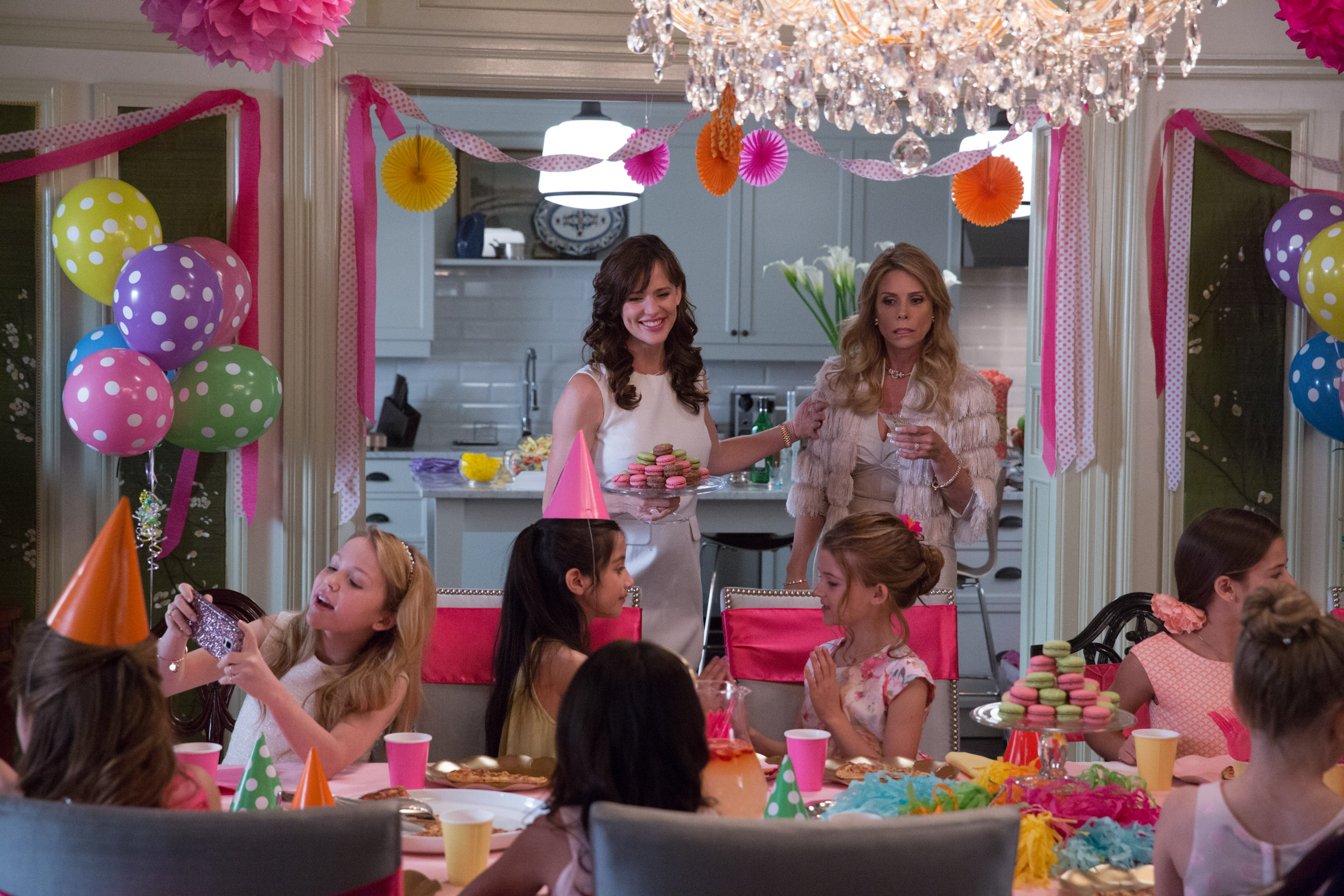 In addition to being a hilarious family film, this movie had some great takeaways for parents about the importance of family and hands-on parenting. Knowing how difficult it can sometimes be to balance work and family, I asked Jennifer ow she makes it all work in her own life. Here’s what she had to say about being a busy mom:

“Oh, my gosh. Like, a total day-by-day disaster. I mean it is super complicated. There’s no other way to say it, and I think the biggest thing to learn, and only time really could teach me, is that there is not going to be a perfect balance.

And even when you’re home all day with your kids, you can’t be everything to everyone all the time if you have more than one child. Eventually, you have to stop and whatever, make dinner, or eventually you have to deal with another child. The pie can only be cut into slices that are so small. So, I took the summer off because last summer I worked. And I really just wanted to be home. And I’m lucky that my job lets me do that. But, even when I’m off, the day’s still left with, oh, would you mind, or could you have a meeting, it’s a job. So, it kind of never stops. And I just do my best.”

One of things I love about Jennifer Garner is how real she is. She is much more than a talented actress. She’s a fierce Mama Bear and I have a lot of respect for her. We have seen her in a couple of mom roles lately. One of the other bloggers asked if it’s harder or easier for her to play these types of roles, since it mimics her real life.

Ms. Garner said that motherhood “is the most rich time in all of our lives. We have the most emotions at play for ourselves, for our kids. We have the most fun. We’re back in tune with our own childhood or our own sense of imagination and fun and silliness.

And so, I really like playing a mom. Plus, I get to work with these kids, and that just makes the day fun. I’m having a great time getting to know the next generation of actors, and, yes, all around, thumbs up on mom roles.”

I’m a huge fan of this movie and think it’s a great one to see with the whole family.

Don’t be the scaredy-cat in your family! ‎Nine Lives opens in theaters this Friday. Get your tickets: http://ninelivesmovie.com/tickets/