Home » Reviews » A Few of Our Favorite Features : 2014 Toyota Sienna

To say I am missing the Toyota Sienna is a gross understatement. Three months was enough time to fall head over heels for the van, and get comfortable with it’s many entertainment and safety features. The whole family is missing the Sienna. Part of me wishes we hadn’t become so attached and accustomed to the Sienna, since after all it wasn’t ours to keep. But now after it’s all said and done, I think it was a really great experience and one I would do over again in a heart beat. I learned a lot about what I have been missing in a car and what I will be sure to get in the next vehicle that I purchase.

There are so many things I love about the Sienna. For my final post in this #SiennaDiaries series, I want to share a few of my family’s favorite features of the 2014 Toyota Sienna. 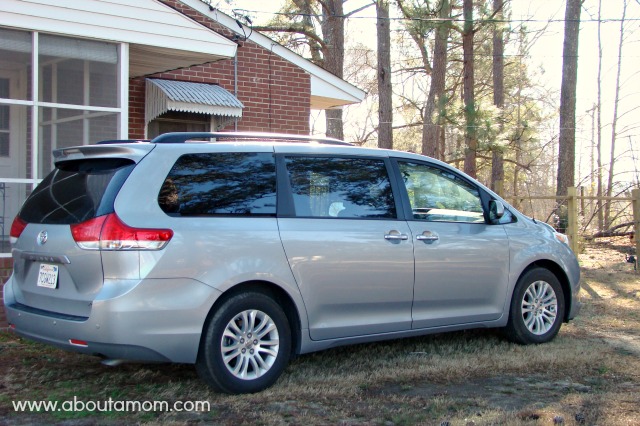 The Toyota Sienna has safety features galore including a rear backup camera, with alert, that lets you see and hear if cars are coming along as you are backing out. The blindspot monitor, flashes yellow, when cars come up beside you. It’s like a second set of eyes! I should also mention the Anti-lock Brakes, seven airbags throughout the car, safety connect, and the pre-collision system. Steering wheel controls and voice activation for things like navigation and making phone calls make it easier for drivers to keep their hands on the steering wheel and pay attention to the road. You can control the radio, make calls, speak in addresses, making for a safer driving experience.

You know how annoying it is when it is drizzling outside one minute, and then pouring the next, only to slows down again? The whole time you are flipping your wipers back and forth. You don’t have to worry about that with the Toyota Sienna. It has automatic windshield wiper controls that can automatically detect what speed it needs to go at.

There are so many other safety features. I’m sure that I’m leaving a lot of them out. You can read more about them on Toyota’s website. 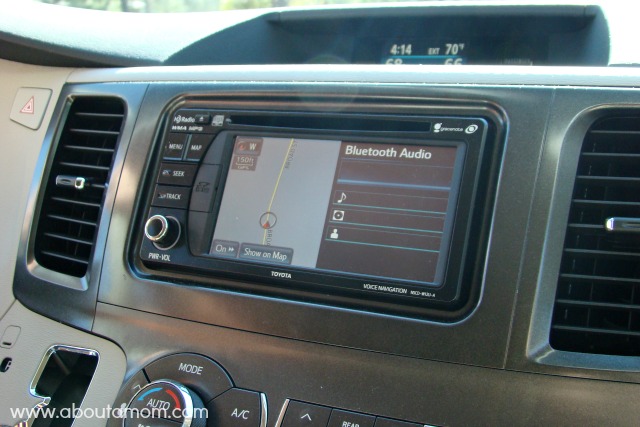 The Dual View Entertainment system is fabulous in the Sienna. It was so nice to pop in a DVD for my granddaughters to watch on the giant wide screen. We never did take advantage of the split-screen mode, but that is a nifty feature. My grandson enjoyed using the wide screen to play video games on longer trips. The van came equipped with 2 sets of wireless headphones, and it was so nice not having to listen to movies while I was driving.

The music options in the Sienna are endless and include: AM/FM Radio, MP3, CD Player, 4-Disc CD Changer, Integrated SiriusXM Satellite Radio, USB port with iPod/iPhone Connectivity, and Music Streaming via Bluetooth which happens to be my family’s favorite.

The listening experience is phenomenal with ten speakers including a subwoofer and easy adjusting things like front/rear/left/right sounds as well as treble/bass. It’s so much fun listening to music in the Sienna. Another cool feature about the sound is the auto-adjust feature. Say you are driving down the road and you speed up, the sound goes up too, when you slow down, the volume lowers. Pretty nifty, right? No tinkering with the volume while you drive. 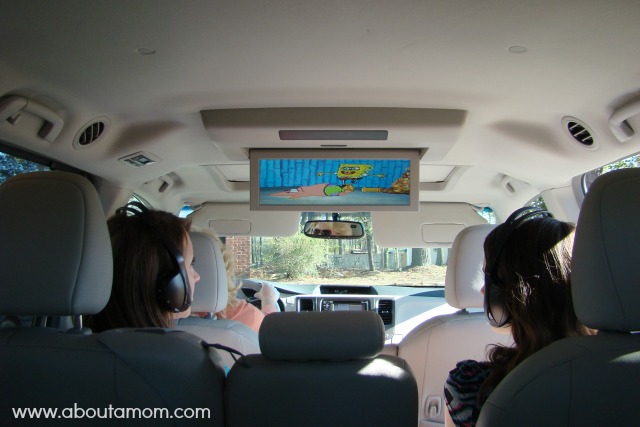 The Toyota Sienna comfortable seats 7-8 people with plenty of leg room, and we often maxed that out with teenagers. Two front seats, two middle row seats, and a bench backseat means enough room for everyone. Reclining and height adjustable seats guarantee a comfortable ride.

The two front seats have seat warmers which was a nice perk during our late season ice storm. 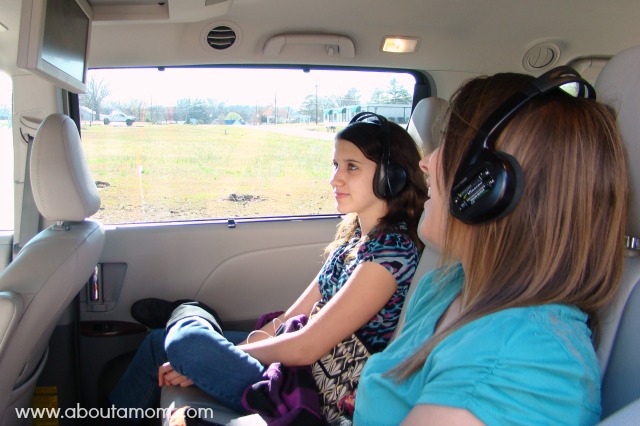 There are so many great features in the Toyota Sienna that lend to convenience. A few that stand out are the numerous cup holders, keeping spills to a minimum. There are multiple usb ports and 120V AC power outlets, allowing everyone to keep their devices charged and in use at the same time.

You can easily haul a large objects around in the Sienna thanks to seats that store themselves. You can touch a button and the rear seats fold themselves up and store themselves in the recessed dip of the trunk area. I love this feature! Additionally, the Sienna has ample trunk space with lots of hooks. It’s amazing what all can fit into the back of this van.

Another nifty feature are the automatic doors and trunk. There are a total of three different options for opening the side doors and trunk without ever touching a handle, making oh so convenient when you have your hands full of groceries. I love the keyless entry and the push button start which is something that took a little getting used to. I kept wanting to put a key into the ignition. 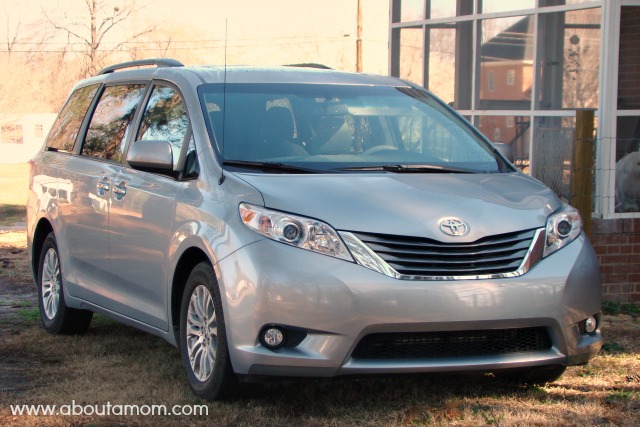 I also want to mention the built in GPS system, which was so nice to have on road trips.

Like I said already, my family is really missing the Toyota Sienna. I’ve been trying to figure out how I can work the purchase of one into the family budget. One thing I know for sure is that I’ll be paying a visit to our local Toyota dealership when I am ready to purchase a new vehicle.

I am participating in a sponsored campaign with Toyota. Al thoughts and opinions are my own.