I’m so excited to share that we have some (4 pack) tickets to give away for both the Augusta, Georgia and Aiken, South Carolina shows! We also have an exclusive discount available on Harlem Globetrotter tickets. Just visit Georgialinatix.com and use the code MOM to receive $5 off your tickets!*

Tickets for both games are on sale now through Georgialinatix.com. Use the code MOM to save $5!* 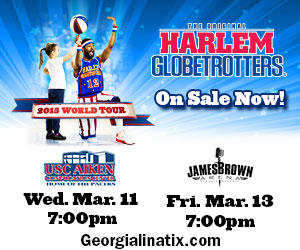 1. As one of the most versatile athletes in the world, which current Globetrotter made it to the finals of “American Ninja Warrior” on NBC and previously had a tryout with the New York Jets?

2. Which Globetrotter is the shortest player in team history?

3. Who are the only Globetrotters to have their jersey numbers retired?

4. How far from the basket is the Harlem Globetrotters’ 4-point shot?

5. What Harlem Globetrotter holds the Guinness World Records for the longest basketball shot from 109’ 9”?

6. When was the last time the Washington Generals organization beat the Globetrotters?

7. What is the Globetrotters’ theme song?

8. How many popes have the Harlem Globetrotters performed for in their history?

9. Name the people who have the distinction of being official Honorary Harlem Globetrotters:

10. In what year did the Globetrotters become the first sports team to be honored with a star on the prestigious Hollywood Walk of Fame?

11. On what spacecraft did the Harlem Globetrotters send a basketball in 2009, becoming the first team to ever send a ball into space?

12. Where, and in what year, did the Harlem Globetrotters play their first game?

13. What World Championship team did the Globetrotters defeat in both 1948 and 1949?

14. What is the largest crowd for which the Globetrotters have ever played?

15. Which Globetrotter was the first African-American to sign an NBA contract?

16. What year were the Harlem Globetrotters inducted into the Naismith Memorial Basketball Hall of Fame as a team?

Which Trivia answer surprised you the most? Did you get any of them right?

Harlem Globetrotters Tickets Giveaway
We have (3) Family Four Packs to giveaway – 2 for the Augusta game and 1 for Aiken! 3 Winners will be randomly selected and tickets will be available at Will Call on the day of the game. Giveaway ends on Sunday, March 8, 2015 at 11:59pm EST. Void where prohibited. Please enter via the Rafflecopter entry form below. Good luck! We hope to see you at the game!