It’s official! I’ll be heading back to class next month to attend Monsters University. A beautiful invitation from Disney Pictures (shown below) appeared in my inbox a few days ago, and I’ve been giddy ever since. The Disney and Pixar hosted media event will be taking me all the way from Georgia to San Francisco, to visit Pixar Headquarters and to see early footage of Monsters University. I’ll be joining 24 other bloggers for the fun-filled event which also includes a visit to The Walt Disney Family Museum, along with interviews with Monsters University Director Dan Scanlon, Producer Kori Rae, animators and a tour of Pixar. Squeee!!! Also included is a screening of the short film “The Blue Umbrella”! 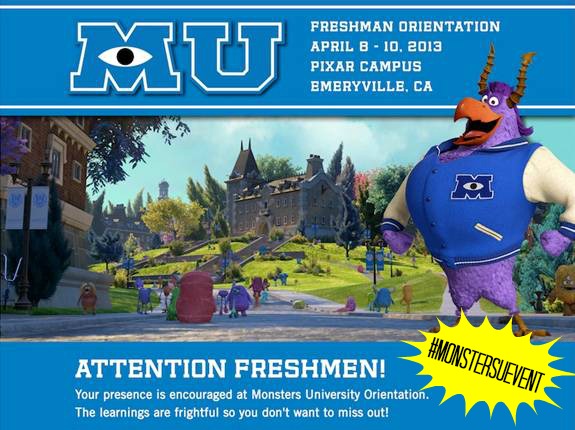 I haven’t been to school in a very long time, and am a little nervous about making the grade. I checked out the School of Scaring curriculum on the Monsters University web site, and am excited to see that classes are offered in ‘History of Scaring’, ‘Disappearing & Hiding’, ‘Scream’, ‘Sneaking’, and all of the skills I will need to be a World Class Scarer upon graduation.

In preparation of heading back to class, I made a video demonstrating some of my best scaring techniques:

Did we scare you?

Note: I was invited to attend the Disney/Pixar Freshman Orientation press trip in April, and all my expenses will be covered.