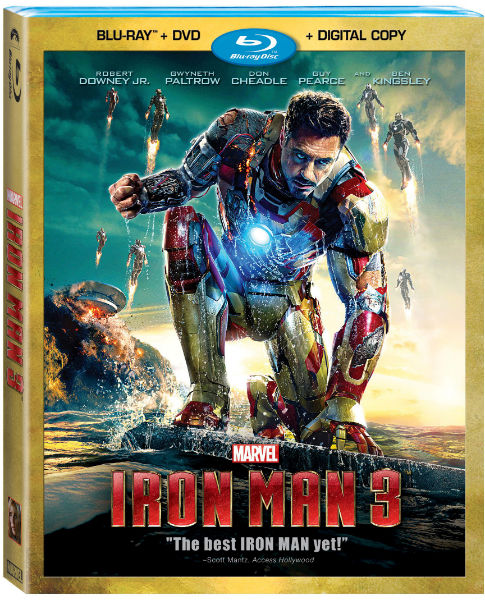 Living an hour or so from the nearest movie theater, we don’t make it to the movies as often as we would like. Needless to say, family movie night at home is a regular occurrence for my family. Fortunately, I was recently sent an Iron Man 3 Blu-ray disc to review. We were probably the last family on the planet to see this movie, making this movie watching experience all the sweeter.

Having enjoyed the first two installments of the “Iron Man” series so very much, I was worried that I might be a little let down by the third. Let me just put it out there right now – Iron Man 3 is my favorite one yet! It has all the action you could ever want, and at times I found myself holding my breath. I was glad to see the relationship between Tony Stark (Iron Man) and Pepper was still going strong. I’m such a sucker for a good romance.

The Tony Stark character is undeniably a bit full of himself, so I was glad to see Iron Man 3 show a more human side to the Iron Man. It was touching to see him interact with a boy whom he met while battling it out in a small Tennessee town. I have always been a super huge Robert Downey Jr. fan, and continue to be thrilled with him in this role.

With a big extended family like mine that includes tweens, teens, and grandmothers we can’t always agree on a movie. What I love most about Iron Man 3 is that every person in my family can truly enjoy it. It’s a big hit all the way around! The combination of humor, romance and intense actions scenes is a formula that can’t be beat.

Marvel’s “Iron Man 3” pits brash-but-brilliant industrialist Tony Stark/Iron Man against an enemy whose reach knows no bounds. When Stark finds his personal world destroyed at his enemy’s hands, he embarks on a harrowing quest to find those responsible. This journey, at every turn, will test his mettle. With his back against the wall, Stark is left to survive by his own devices, relying on his ingenuity and instincts to protect those closest to him. As he fights his way back, Stark discovers the answer to the question that has secretly haunted him: does the man make the suit or does the suit make the man?

Bonus Features: I really enjoyed the Iron Man 3 Blu-Ray bonus features. They totally make it worthwhile to pick up the Blu-ray version.

Deconstructing The Scene: Attack On Air Force One: Jump into action with the stunt-team
skydivers in this close-up look at creating one of the movie’s most memorable scenes.

Other bonus features include an exclusive behind-the-scenes look into Marvel’s “Thor: The Dark World,” which shows off the spectacular new worlds, unforgettable characters, and pulse-pounding thrills of the upcoming blockbuster movie, and two behind-the-scenes featurettes “Iron Man 3 Unmasked,” in which the film’s cast and crew offer a crash course in epic movie-making, Marvel-style, and “Deconstructing The Scene: Attack On Air Force One,” which allows viewers to jump right into the excitement of creating one of the film’s most memorable action sequences.