This blog post is part of a paid SocialMoms and Disney Mary Poppins blogging program. The opinions and ideas expressed here are my own. For more posts on this topic, click here.

It’s supercalifragilisticexpialidocious! Just in time for the holidays, releasing from the Disney Vault and coming to Blu-ray for the first time is the beloved classic Mary Poppins. I have such a strong connection to this film, being just a teenager when it came out. My world seemed so small at the time, and this movie was pure magic to me. It was bigger than life and a look into another world, far greater than I had ever dreamed possible. Julie Andrews and Dick Van Dyke captivated the screen and captured the hearts of young girls everywhere like myself.

Flash forward 50 years later, and the Mary Poppins 50th Anniversary Edition Blu-ray Combo Pack is set to be released on December 10, 2013. I have watched this film countless times throughout the years, and cannot believe that some of my grandchildren had not seen it until now. Thanks to an all-new digital restoration, the movie looks better than ever before. Charming, magical, full of whimsy and delight, 50 years later Mary Poppins still captivates children young and old alike. It’s so wonderful to be able to share this treasure of a film with the newest members of my family.

There are certain songs, scenes, dance numbers, and phrases that really stand out to me in this film. Mary Poppins (Julie Andrews) is pretty, punctual and “practically perfect in every way.” In fact, unlike the other nanny applicants who stood in line, Mary Poppins’ arrives to the Banks’ house, gliding in on a cloud and floating down with her umbrella. This scene to me, truly sets the stage for the magic which is about to happen in the lives of the rather neglected Banks family children and for those watching the film. Then the interview between Mr. Banks and Marry Poppins is quite comical. It seems more that Mary Poppins is interviewing Mr. Banks.

“Just a spoon full of sugar helps the medicine go down!” is one of many lines from this movie that has stuck with me through the years. 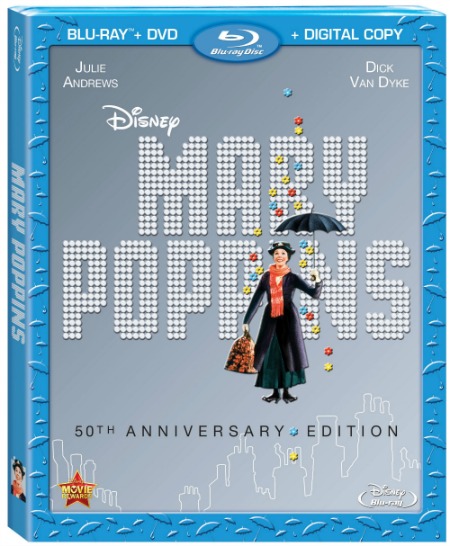 I must confess that I had a bit of a school girl crush on Bert (Dick Van Dyke) who was a chimney sweep, jack-of-all-trades and Mary’s closest ‘normal’ friend. Bert is just an all around fun character who adds a fun dynamic to the film. It seems to me that Bert has a way of bringing out Mary Poppins’ fun side.

With amazing cheerful music and amazing dancing, Mary Poppins stands the test of time as a good family movie. It is by far one of the best Disney films and best movie sound tracks of all time. I am so excited about the release of the 50th Anniversary Edition.

Experience the extraordinary animation, dazzling special effects and award-winning music of Walt Disney’s MARY POPPINS in this restored and remastered 2-Disc 50th anniversary Edition, for the first time on Blu-Ray combo pack and digital HD December 10th! Join the “practically perfect” Mary Poppins (Julie Andrews) for a “Jolly Holiday” as she magically turns every chore into a game and every day into a whimsical adventure. Along the way, you’ll be enchanted by unforgettable characters such as the multi-talented chimney sweep Bert (Dick Van Dyke). Unpack Mary’s magical carpet bag full of bonus features, including all-new bonus from the “supercalifragilisticexpialidocious” Broadway production of MARY POPPINS. You won’t need a “Spoonful Of Sugar” to love every moment of this timeless Disney classic!