My Neighbor Totoro Blu-Ray - About a Mom ↑ 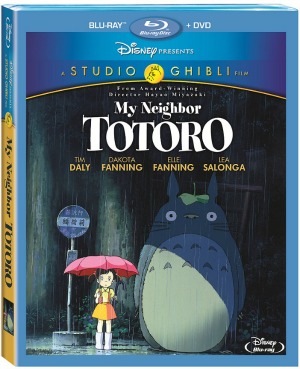 My teenage nieces and nephews are huge fans of Japanese animation, so I figured I would firmly establish the fact that I am the best Auntie ever by getting us a review copy of My Neighbor Totoro on Blu-ray. Having not seen this classic film movie before, I was a bit eager to see it myself. The heartwarming tale of childhood imagination and the special bond between two sisters is totally sweet and quirky, and is sure to be one that we watch over and over again.

The Japanese animation full length feature by Academy Award®-winning director Hayao Miyazaki has been brought over by Disney with a dubbed soundtrack. Disney is celebrating the 25th anniversary of “My Neighbor Totoro” with the film’s Blu-ray debut on May 21, 2013. It is available or the first time on Disney Blu-ray with a spectacular new HD digital transfer, and perfect picture and sound.

Lauded as “one of the most beloved of all family films” by critic Roger Ebert, “My Neighbor Totoro” is the heartwarming story of sisters Satsuki (voiced by Dakota Fanning) and Mei (voiced by Elle Fanning). Much to their delight, when Satsuki and her four-year-old sister Mei move into a new home in the countryside, they discover that their new neighbor is a mysterious forest spirit called Totoro—who can be seen only through the eyes of children. Totoro introduces them to extraordinary characters—including a catbus—and takes them on an incredible journey.

I received the above mentioned item at no cost for review. All opinions are completely my own.