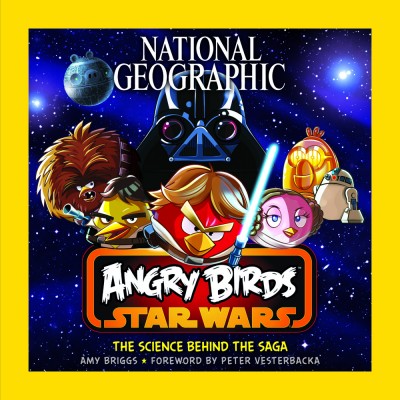 The book is organized into chapters that correlate to the Star Wars saga and the levels in the games. To tell the story, the book uses artwork of iconic game scenes and sequences. To show the science, illustrations will feature call-outs that explain the scientific underpinnings of key elements. For instance, readers will learn:

Can we use starlight to power planes?
Will traveling through hyperspace be possible?
How close are we to discovering life on other planets?

The ‘Bonus Level’ chapter of the book reveals never-before-published information about the characters, planets, and technology at work in Angry Birds Star Wars II. This is a very fun book and a must have game companion for fans of the Angry Birds Star Wars Games. Inside the book are many interesting facts that correlate with events from Star Wars. Do you remember when Han Solo fell into the hands of the Pig Empire in Cloud City and was frozen in carbonite? You’ll be amazed to learn that there is a wood frog, native to North America, that can survive being frozen solid in the winter and thawing out in the spring. That’s so cool! This book definitely meets the very high standards one would expect from a National Geographic publication. Kudos to author Amy Briggs for bringing this fun book to life!

I highly recommend this book as one to put under the Christmas tree this year. National Geographic Angry Birds Star Wars has a suggested retail price of $13.95 U.S. paperback, but is currently available from Amazon for just $8.55.