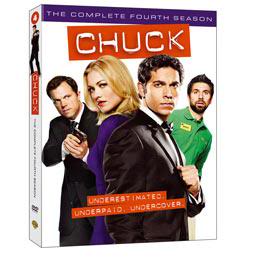 Here you go Chuck fans, the fourth season of Chuck is now available on DVD and Blu-Ray! I have been a huge Chuck fan going back to season one when the Nerd Herder first accidentally downloaded the Intersect into his brain. It has been so fun to watch the once stammering Chuck evolve into a true spy who no longer takes crap from anyone. I really like in season four that along with outwitting assassins and bad guys, Chuck still finds

time to romance and propose to Sarah.

In the finale of the fourth season, Sarah has been shot by the “Norseman” device and only has twelve hours left to live. Chuck turns his back on the CIA and despite all warnings sprints throughout the episode to find Volkoff and the antidote. I am so glad that Chuck was able to reach Sarah in time and they were finally able to get married.
It really touched me how Chuck was willing to throw his entire career away and put everything on the line to save Sarah. I am typically a very cautious person with a pretty boring life and can’t say that I have personally been in a situation that required me to display the guts that Chuck did in season four. Fortunately, I have the fun of watching Chuck and get to enjoy Chuck and Sarah’s exciting lives.
Have you ever been in a situation that despite all odds and warnings you decided to make a run for it? I would love to hear how it worked out for you.
In season four, the geek gone spy is putting everything on the line, available for pre-order here: http://bit.ly/r3n2er
Disclaimer: I was hired by Warner Brothers to get the word out about Chuck: The Complete Fourth Season on DVD/ Blu-Ray. All opinions are 100% my own.