I think most kids are obsessed with characters from their favorite TV shows and movies. Heck, I find myself obsessed with some of these characters! I’m probably as much a Transformers fan as my son. Thank you to Hasbro for providing me with samples of some of this years hottest toys.

There is no shortage of heroes and villains, after big summer blockbusters like Transformers: Age of Extinction, The Amazing Spider-Man 2, and Marvel’s Guardians of the Galaxy. I don’t know a little boy who isn’t crazy for Groot and Rocket Raccoon. My youngest niece really enjoys her My Little Pony and Littlest Pet Shop TV Shows. The new Hasbro toys for Fall 2014 offer great variety for kids this Fall, and includes all of your child’s favorites.

Hasbro toys is featuring this year’s hottest TV and movie characters will entertain the whole family with action, adventure, friendship, and magic. Get ready to let your imagine run wild and relive your favorite TV and movie scenes with Hasbro toys! 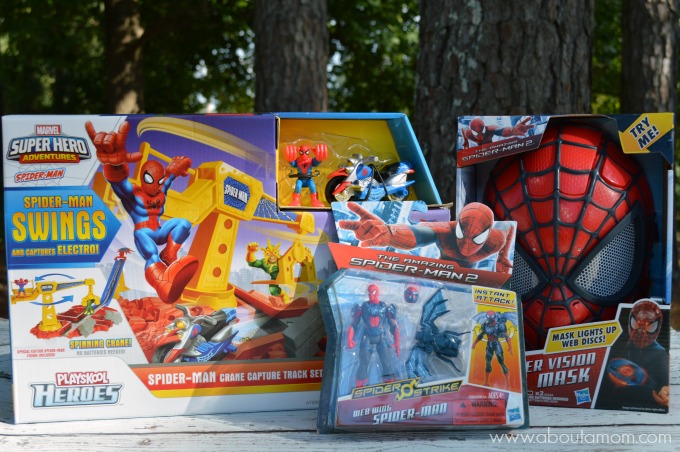 THE AMAZING SPIDER-MAN 2 SPIDER STRIKE 3.75-Inch Action Figures (Ages: 4 & up/ Approx. Retail Price: $9.99): In 2014, fans can re-creat the excitement of THE AMAZING SPIDER-MAN 2 film. Each figure features great articulation and deci, as well as an accessory that changes shape when it makes contact with the SPIDER STRIKE figures. Figures include SLASH GAUNTLET SPIDER-MAN, BLITZ BOARD SPIDER-MAN, IRON CLAW SPIDER-MAN AND POWER CHARGED ELECTRO. Ten figures to collect. Each figure sold separately.

SUPER HERO ADVENTURES SPIDER-MAN CRANE CAPTURE TRACK SET (Ages 3-7 years & up/Approx. Retail Price $19.99): Race into action with the all new SPIDER-MAN Crane Capture Track set! MARVEL’S ELECTRO is up to his old tricks, but SPIDER-MAN has a plan to capture him! He races down the track, grabs the bar and spins the crane – captured! Let your preschooler’s imagination run wild with this track set that connects in different ways and builds up to 27″ long. Also works with Actions Figure Racing vehicles and Launchers (each sold separately). 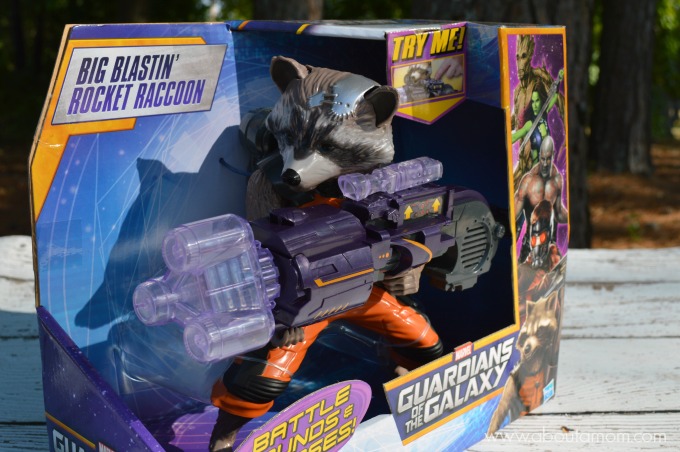 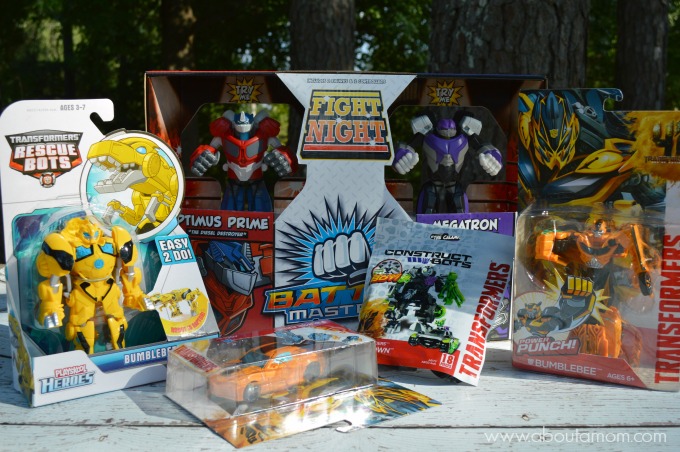 TRANSFORMERS: AGE OF EXTINCTION ROBOTS IN DISGUISE ONE-STEP CHANGERS Assortment (Ages: 5 & up/Approx. Retial Price: $9.99): It’s quicker and easier for kids to get into the action of TRANSFORMERS! The greates AUTOBOT, DECEPTICON and DINO-BOT characters from the new film TRANSFORMERS: AGE OF EXTINCTION can convert from a great robot action figure into a vehicle or dino-mode and back – in just one step! Kids will have a blas converting characters like OPTIMUS PRIME, GRIMLOCK, BUMBLEBEE, DRIFT, LOCKDOWN, each with their own unique method of converting inspired by the film – flip it, pop it, pull it and more! There are 18 figure sot collec tin 2014, each sold separately.

TRANSFORMERS: AGE OF EXTINCTION POWER BATTLERS Assortment (Ages: 6 & up/Approx. Retail Price: $12.99): TRANSFORMERS POWER BATTLERS features cool characters from the new film TRANSFORMERS: AGE OF EXTINCTION and let kids unleas awesome, easy-to-activate battle action! With a simple squeeze of the leg or twist of the torso, each figure unleashes its own signature attack. Watch out for BUMBLEBEE’S Power Punch! Plus, each figure also converts from robot mode to alternate mode in less than ten steps. Choose from characters like BUMBLEBEE, HOUND, CROSSHAIRS and more. There are 15 figures to collect in 2014, each sold separately.

TRANSFORMERS RESCUE BOTS RESCAN Assortment (Ages 3-7 years/Approx. Retail Price: $9.99): More forms means more fun! The iconic RESCUE BOTS characters are taking new form. OPTIMUS PRIME bot now converts into a monster truck, BUMBLEBEE bot converts into a motorcycle, and HEATWAVE bot can save the day as a high speed FIRE-BOT. Perfect for those active preschoolers in the family, kids can take their bots on their adventures! Each sold separately. 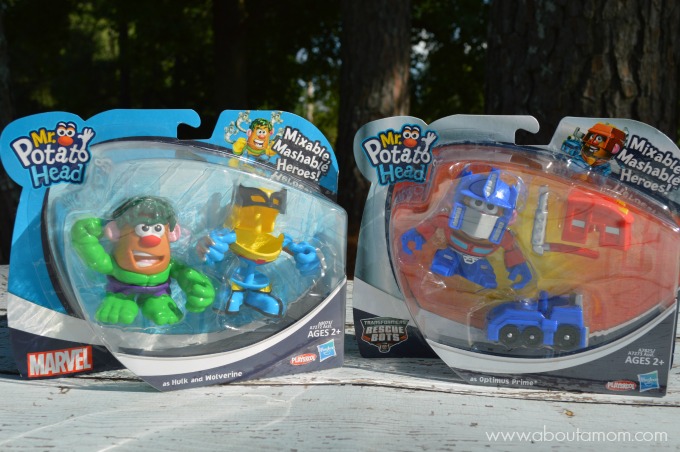 MARVEL MIXABLE, MASHABLE HEROES FIGURE ASSORTMENT (Ages 2 years & up/Approx. Retail Price: $4.99): Changing identity has always been a favorite practice for MARVEL heroes… and the MR. POTATO HEAD character too! Imaginative kids can switch from SPIDER-MAN to DOC OCK spuds or HULK to WOLVERINE spuds, or even create their own unique mashed up combination. Each sold separately. The pack includes on two-inch potato body and two three-piece super hero costumes. 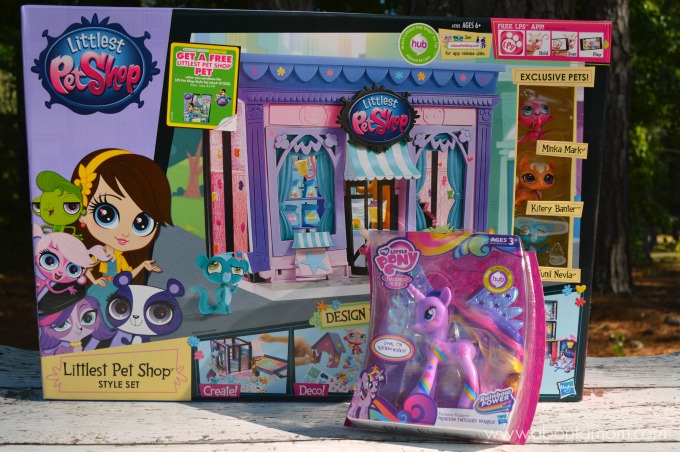 All of these new toys are FANTASTIC, but seeing Mr. Potato Head as TRANSFORMERS and MARVEL heroes might just be the best! If your child is still excited about seeing their favorite summer movie, one of these toys would make the perfect gift. I know you don’t want to hear this, but the holiday season is just around the corner – start shopping now, if you haven’t already! All of these toys are available at most major toy retailers nationwide and on HasbroToyShop.com.

Again, many thanks to our friends at Hasbro for providing us with samples of these toys. Laura and I will be donating them to the Glascock Action Partners Annual Toy Drive, along with all of the toys you will be seeing in our 2014 Holiday Gift Guide. We’re hoping to make the holidays a little brighter for kids in our community.