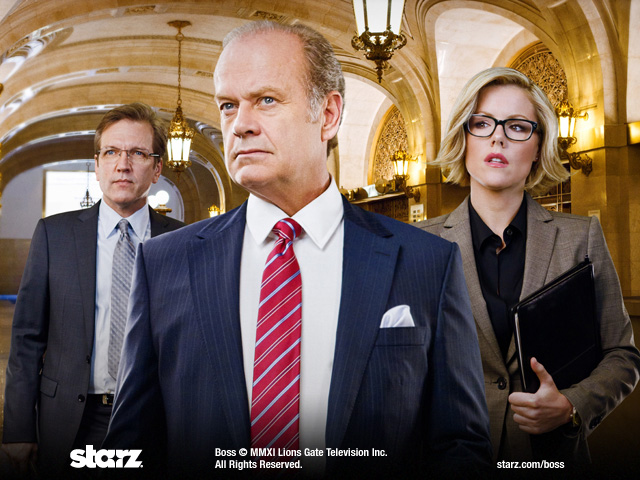 I am so glad to see Kelsey Grammer returning to television. I have found myself watching the trailer for BOSS over and over again. Kelsey Grammer seems so perfectly cast for the role of the most effective Mayor in recent history, Tom Kane.
Willing to get the job done regardless of the cost, Mayor Tom Kane (Kelsey Grammer) sits like a spider at the center of
Chicago’s web of power: a web built on a covenant with the people. The people of Chicago, thread into this complex web, expect to be led, they want disputes settled, jobs dispensed, and loyalties. They are willing to look the other way, as long as the job is done.
Mayor Tom Kane has a serious problem. A degenerative brain disorder is ripping everything away from him. He can no longer trust his memory, his closest allies, or even himself. Kane’s wife Meredith (Connie Nielsen) is totally in the dark about her husband’s troubles. Theirs is a marriage of convenience. Kane’s political aide Kitty O’Neil (Kathleen Robertson) has her suspicions about her boss’s problem, but says nothing. Kane’s chief of staff, Ezra Stone (Martin Donovan) and State Treasurer Ben Zajac (Jeff Hephner) choose to not get involved, concerned with their own ambitions. Kane’s estranged daughter Emma (Hannah Ware) is the only one with a chance of learning his secret.
This is sure to be the toughest term yet for the BOSS.
STARZ also brings you a fun, interactive Scandalous Dirt Aggregator Web Site:
The site was designed as an interactive and innovative platform where you can use the intuitive sorting function to check out the latest political conversation across the country and add fuel to the fire by voting, tweeting and chiming into the conversation. For example, your Political headlines are aggregated and will show up in the Top 5 Stories and Buzz Worthy Conversations at times depending on the latest pundit’s report and how people are reacting to it via Twitter. Depending on the topic of conversation that peaks readers’ interest, they have the ability to tweet the article on the spot. There’s also an interactive map where you can break down the political scandals by city.You can check out the first episode right here:
BOSS premieres this Friday on STARZ, October 21 @ 10pm ET/PT. You can even catch a sneak peak and watch the entire first episode online without a STARZ subscription. Disclosure: This promotional sponsored post was made possible by Mom Spark Media. I was compensated for my time and work on this campaign. Any opinions shared are my own.