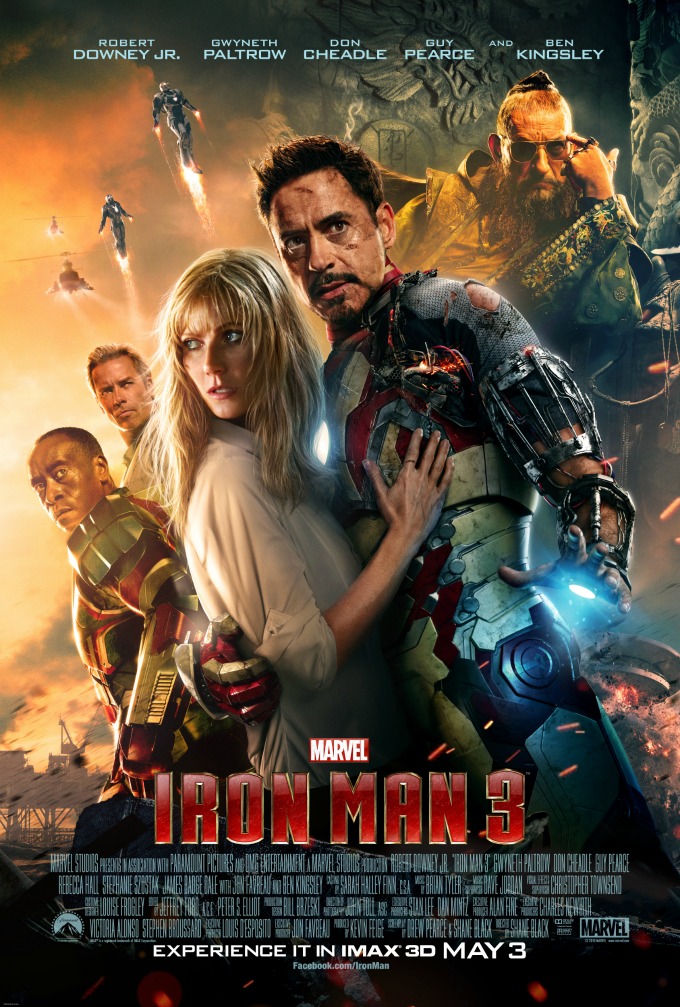 I honestly think that a good movie poster can make or break opening weekend for a film. I could be totally wrong about this of course, but it’s just my opinion. There are several key elements of a movie poster that really gets me excited about seeing a movie. One of the latest hollywood movies IRON MAN 3 movie poster reveals a lot more about the movie than previous posters, and has me more excited than ever about heading to the theater on May 3rd!

After seeing this poster, there is no doubt in my mind that there will be a lot of action and special effects in this film. There are sure to be villains, and Iron Man looks like he’s just had the battle of his life, so you know there is going to be some devastation… but Iron Man will prevail… won’t he? Seeing the way Iron Man is holding Pepper Potts gives me hope that there will be a little romance as well.

I predict IRON MAN 3 is going to evoke more emotion than previous movies in the series, something that appeals to me. I don’t enjoy movies that are all action and special effects, and appreciate that the main characters in this Marvel series have real depth of character.  I like it when I actually care about what happens to the people in the movie. I think it’s going to be the total package, and a movie that every member of the family will enjoy.

Marvel’s “Iron Man 3” pits brash-but-brilliant industrialist Tony Stark/Iron Man against an enemy whose reach knows no bounds. When Stark finds his personal world destroyed at his enemy’s hands, he embarks on a harrowing quest to find those responsible. This journey, at every turn, will test his mettle. With his back against the wall, Stark is left to survive by his own devices, relying on his ingenuity and instincts to protect those closest to him. As he fights his way back, Stark discovers the answer to the question that has secretly haunted him: does the man make the suit or does the suit make the man?

IRON MAN 3 arrives to theaters on May 3rd!

So what does this poster say to you?