A little wine, cheese, good friends, and a good book. What more could a girl want? Jonathan Tropper’s novel This Is Where I Leave You is coming to theaters on September 19, and the dramatic comedy promises to prod every bit of funny out of the dynamics of family dysfunction in the aftermath of a father’s funeral. I love reading the book, before seeing a move. Don’t you? 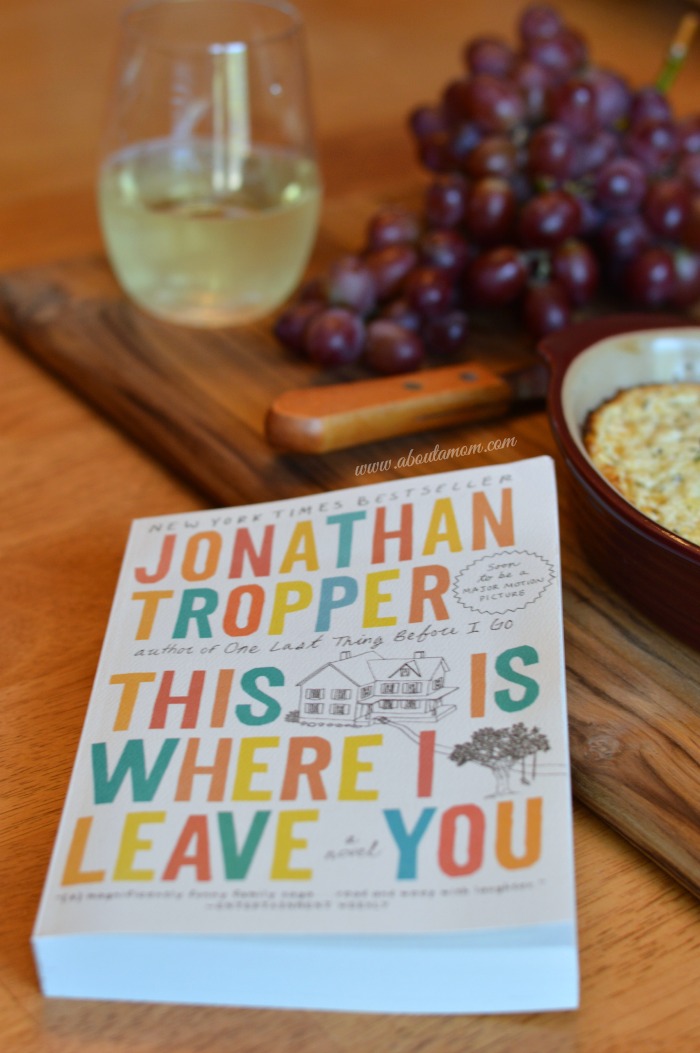 I told you a couple of weeks ago about my This Is Where I Leave You Book Club plans, and this past Friday the girls gathered to dish about the book. We had a lot of fun. You know I can’t have a gathering without whipping up something yummy to eat, so I made some scrumptious Baked Goat Cheese Dip served with crisp baguettes. 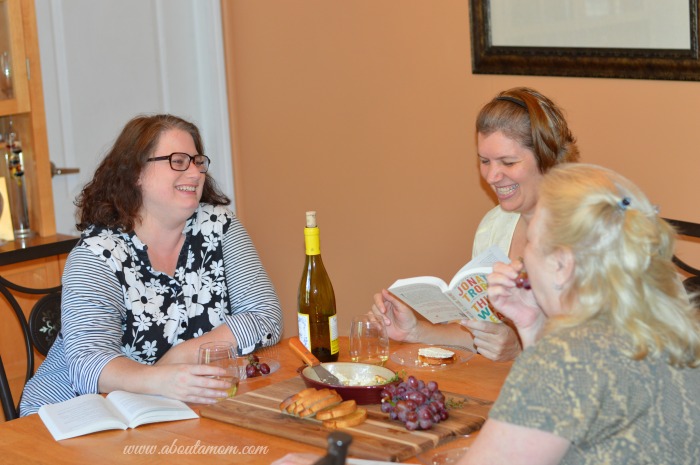 It’s safe to say that we have all enjoyed reading this book. I’m not quite finished reading yet, but will be sure to do so before the movie release date of September 19. This is one of those books that will make you laugh out loud, but also get you a bit teary eyed at times. If you are thinking about having your own This Is Where I Leave You book club, but aren’t sure where to get started, here are some great discussion questions you can use.

This Is Where I Leave You Discussion Questions

1. Discuss Judd Foxman, the novel’s protagonist, from his very ironic and dry sense of humor (shared also by his brothers and sister), to his anger and vulnerability regarding his wife’s infidelity, to his conflicted emotions regarding his immediate family. What was your first impression of the protagonist/narrator of this novel? What did you find the most engaging aspect of his character? Did you find any aspect of him off-putting?

2. What was your first impression of Judd’s wife, Jen? Because you see her almost entirely from Judd’s perspective, was there any chance to see her as a sympathetic character before Judd finds her so? Do you think that Judd and Jen have a chance at salvaging their relationship, with or without a baby girl to raise?

3. Discuss Judd’s mother and her relationship with each of her children. Do you think that Hillary Foxman was truly a bad mother? Was there any real irony in her being a child-rearing guru? What was your opinion of her character?

5. Similarly, what comment is Tropper making about the role of trauma and tragedy in our lives? Almost every character in this book suffers or has suffered: Phillip from his neglected/overindulged childhood; Judd from his wife’s infidelity; Horry from his brain damage; Paul from the Rottweiler attack; Wendy from her unhappy marriage; and Alice from her infertility. What does their unhappiness, and the way each person copes with that unhappiness, teach us? 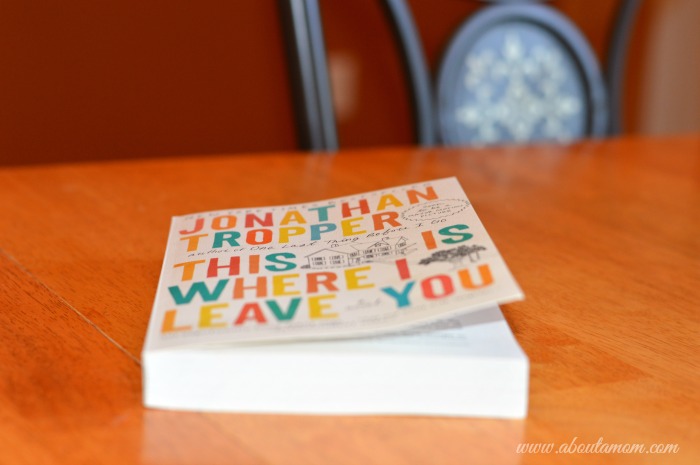 8. For all of their faults, is the Foxman clan a likeable group of people? What makes them an endearing group of people? Who did you like the most, and who did you find the least appealing, and why? Were there any characters you would have liked to see developed further?

9. Throughout the book Judd has recurring nightmares that often involve a prosthetic limb. Discuss the way these dreams acted as elements of foreshadowing and symbolism throughout the narrative. Consider, too, how they reflected Judd’s emotional state as the novel progresses.

10. What did you think of Judd’s exit at the end of the shiva? Was his disappearance in Phillip’s Porsche realistic? Appropriate? Did you find it a satisfying resolution to the book?

What will you serve at your This Is Where I Leave You book club gathering? I suggest keeping it simple. At my book club gathering, we had Baked Goat Cheese Dip served with toasted baguettes, fresh fruit, and wine — but of course. The goat cheese dip is so simple to make. Here’s the recipe: 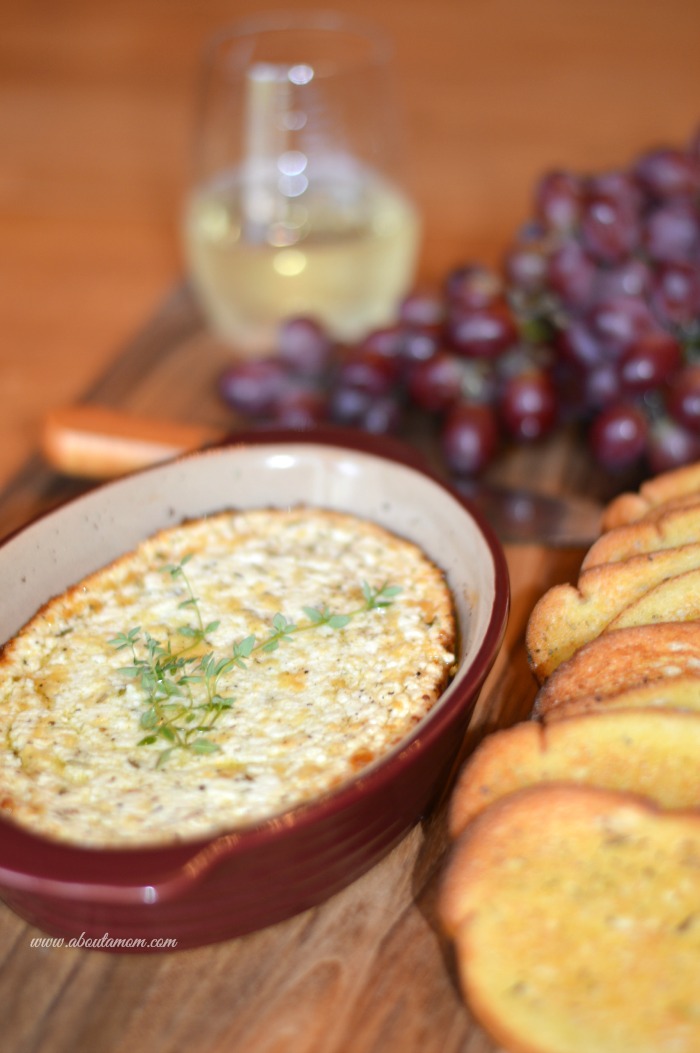 Directions:
In a bowl, stir and combine the first five ingredients. Spoon into a a small greased baking dish. Sprinkle the top with some fresh cracked pepper.

Bake at 325 degrees for 15 to 20 minutes, until golden brown. Remove from the oven and sprinkle with additional olive oil. Serve warm.

This Is Where I Leave You – In Theaters September 19

The dramatic comedy “This is Where I Leave You” is directed by Shawn Levy, and based on the hilarious and poignant best-selling novel by Jonathan Tropper. It features a starring ensemble cast including Golden Globe winner Jason Bateman (“Arrested Development”); Golden Globe and Emmy Award winner Tina Fey (“30 Rock”); and two-time Oscar® winner, multiple Golden Globe honoree and 2013 Emmy Award nominee Jane Fonda (“Klute,” “Coming Home,” HBO’s “The Newsroom”). 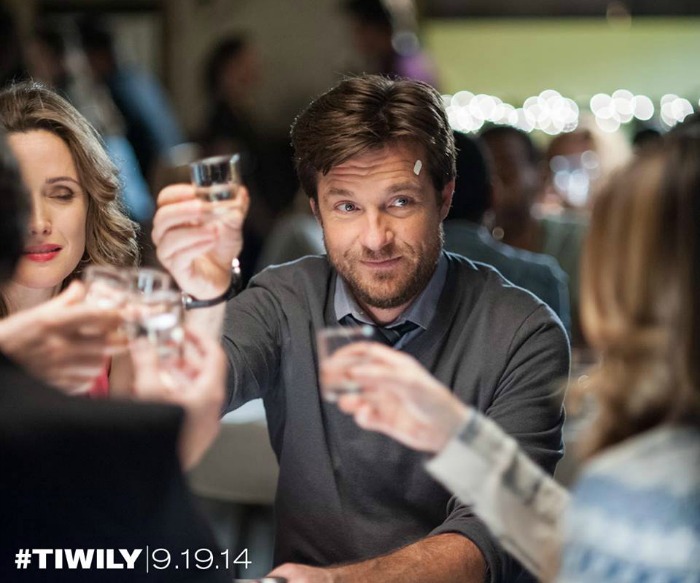 When their father passes away, four grown siblings, bruised and banged up by their respective adult lives, are forced to return to their childhood home and live under the same roof together for a week, along with their over-sharing mother and an assortment of spouses, exes and might-have-beens. Confronting their history and the frayed states of their relationships among the people who know and love them best, they ultimately reconnect in hysterical and emotionally affecting ways amid the chaos, humor, heartache and redemption that only families can provide—driving us insane even as they remind us of our truest, and often best, selves.

If you don’t have your own book club, you can totally join the virtual book club that Warner Bros. Pictures’ is hosting on Facebook. Also, follow the #TIWILY #TIWILYbookclub hashtags on Twitter and Instagram to see more book club discussion.

Ready to read the book and see the movie? One lucky About A Mom reader will win a copy of Jonathan Tropper’s This Is Where I Leave You, along with a $25 Visa Gift Card to go see the movie, opening on September 19. Giveaway ends on September 14, 2014 at 11:59pm ET. Open to US.