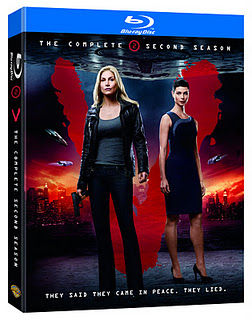 In Season Two of the television series V, Hobbes constantly calls Ryan out as a traitor even though his treachery has far worse consequences. Not only has Hobbes killed humans, he slept with Erica and then indirectly cause the death of Erica’s ex-husband Joe.
Have you ever been in a situation where someone regardless of their own actions kept pointing out what you were doing wrong? How did you bring this to light or work around it to move forward?
I certainly have! I was in a long-term relationship with someone a bit like Hobbes. My ex was always giving me grief for silly things like showing up 5 minutes late or going to the movies with a girlfriend. I overlooked so many bad things
that he did in our relationship. He did not like watching movies, so was I supposed to never again do something that I really enjoy? The relationship became much too negative and stressful for me. I finally wised up and got out.
If you haven’t seen the second season of V, you are probably wondering  how Ryan dealt with Hobbes? You’ll just have to watch the second season of V on DVD or Blu-Ray to find out. I’m not going to spoil it for you!
Season Two of V is now available for purchase on DVD and Blu-Ray.
I have been hired by Warner Bros. WBWord division to promote V Season Two on DVD.