You don’t have to be in New Orleans for this celebration. Head on down to sunny Florida for the Universal Orlando Mardi Gras celebration! It’s a family-friendly celebration like no other. 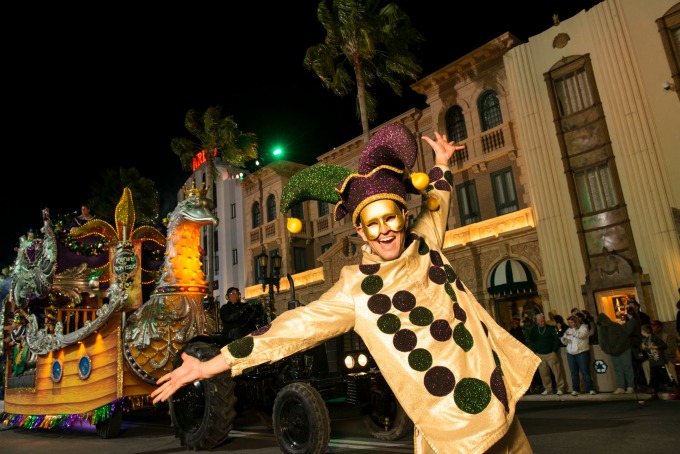 I had the pleasure of being hosted by Universal Studios Orlando for on a media trip last week. The theme of our trip was ‘Girls Just Want to Have Fun’ and FUN we had!

What can you expect at Universal Orlando Mardi Gras?

Long before the sun sets, you’ll begin to notice some interesting and some very tall characters around the park, near the French Quarter Courtyard area. The colorfully costumed and oh-so talented street performers will keep you entertained for hours. They are more than happy to pause for some photo opps which is something I though was very nice. 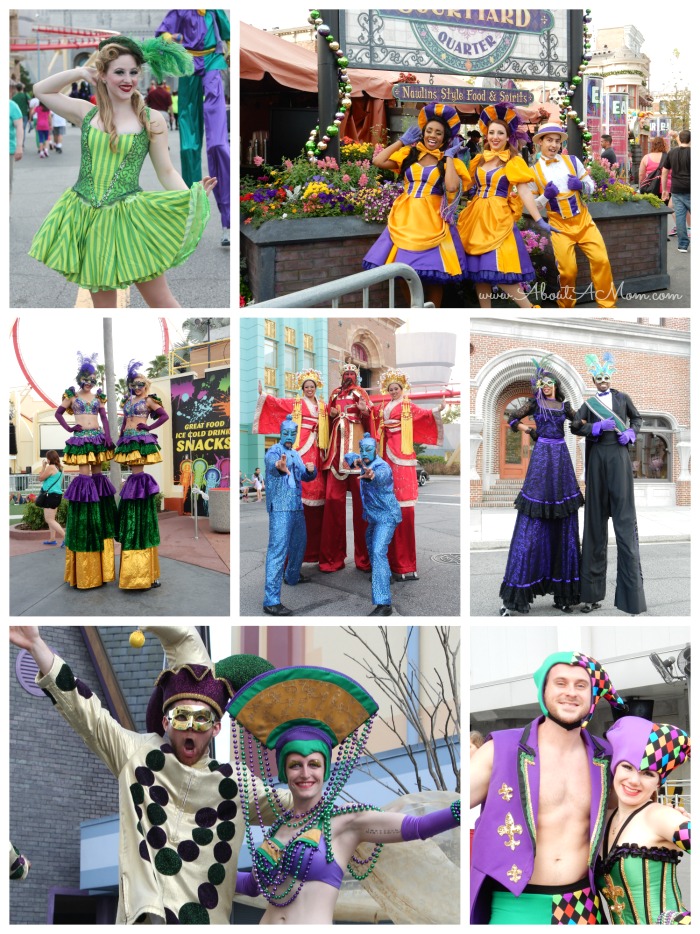 Stroll through the French Quarter Courtyard for a true New Orlean’s style Mardi Gras experience. You’re taste buds will be dazzled by the mouth-watering Cajun cuisine such as jambalaya, gumbo, King cake, beignets and more.

Stop for a henna tattoo or a reading, and listen to an authentic New Orleans band. These world class bands have traveled all the way from Bourbon Street to play jazz, blues, zydeco and more for Universal Orlando guests. My group just had to stop for a bit to enjoy the tunes and get our dance on. 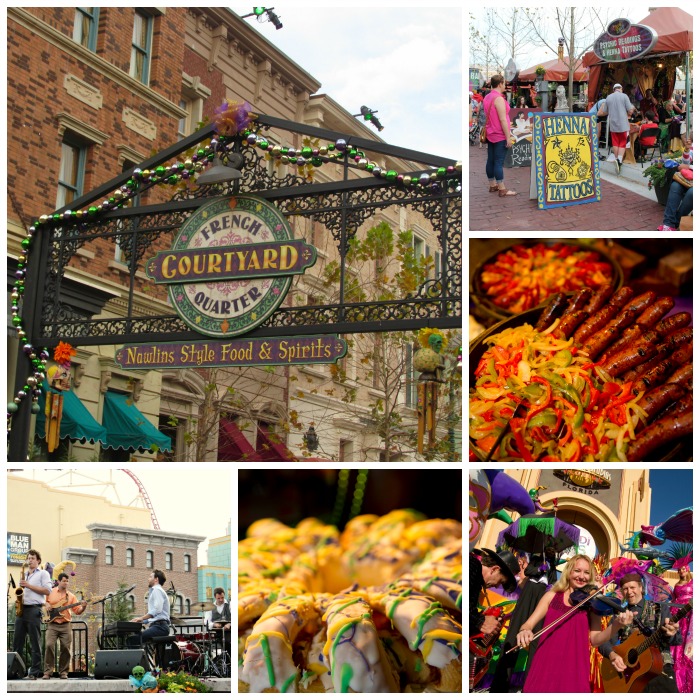 After strolling through the French Quarter Courtyard for a bit, you’ll want to grab a spot to watch the dazzling Mardi Gras Parade. Guests will have the opportunity to catch handfuls of colorful beads, watch choreographed performance, and see 12 exquisitely detailed Mardi Gras floats that were engineered by Blaine Kern Artists – the same company that has been hand-crafting floats for the iconic New Orleans celebration since 1947.

I have to say that these floats are AMAZINGLY detailed and beautiful! 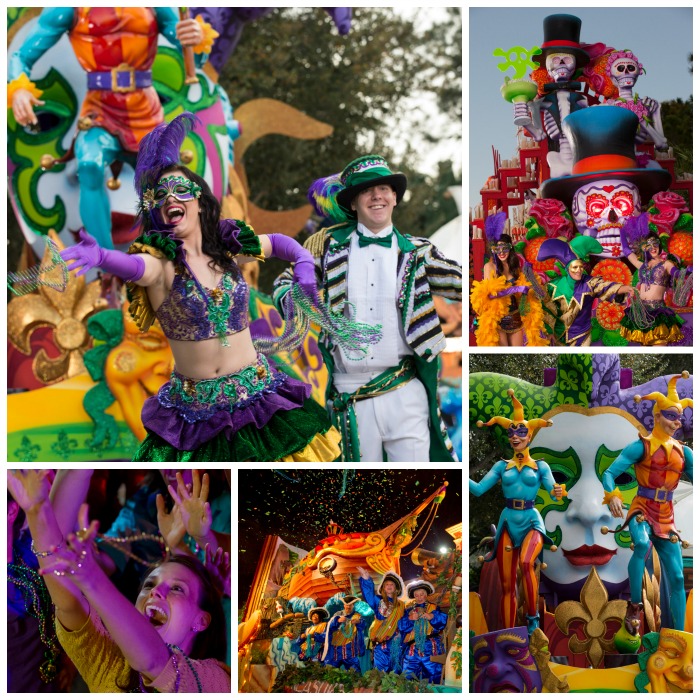 My group got to ride on the King and Queen parade float. It was such a fun treat! We dressed in costumes, complete with a royal crown, and tossed beads to the excited parade watchers. I’ve never made so many people happy at one time. That was such a neat experience.

Want to ride on a float yourself? Universal Orlando lets Annual Passholders sign-up for an opportunity to ride a Mardi Gras float! 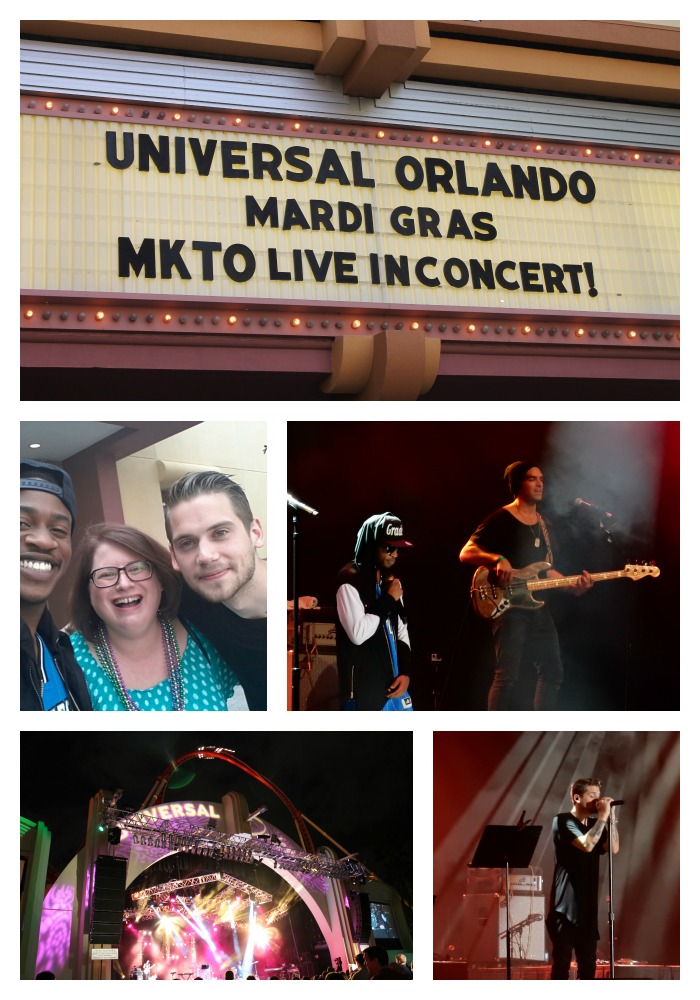 I got to see the MKTO concert during my visit! I must confess to acting a bit like a teenager, especially so when MKTO’s Malcolm and Tony surprised my group with a meet and greet before the concert. Swoon! I even got a selfie with the guys. My teen nieces were so jealous over that!

Universal Orlando Mardi Gras was such a fun and amazing experience! I can’t wait to return with my family. I know they will enjoy it as much as I did. 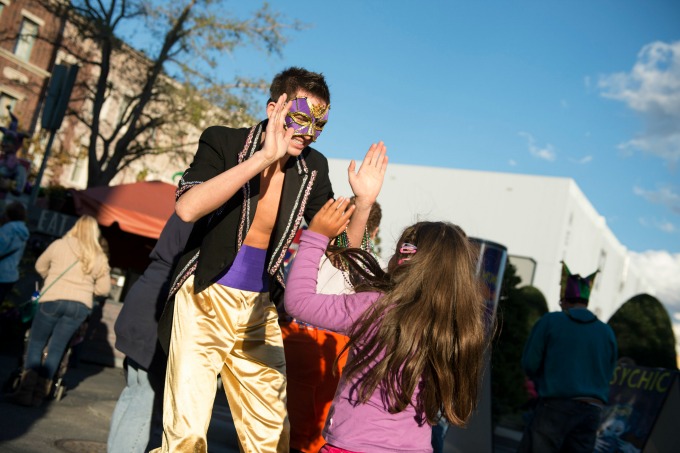 There is already so much to do in a day at Universal Studios Orlando. Add to it the Mardi Gras celebration, and you have a fun and exciting family-friendly experience like no other. Find out more about Universal Orlando Mardi Gras, buy tickets, or plan your next vacation.

Are you ready for a family-friendly vacation at Universal Mardi Gras?