The love triangle has long been the subject of film, television and novels. A good love triangle can affect the viewer or reader making them choose sides and become invested in the characters’ happing endings. In Water for Elephants, which debuts on Blu-ray and DVD November 1, Marlena struggles between her devotion to her abusive husband, August, and her passion for the kind Jacob.

Here, we will delve into the top ten greatest love triangles in film, and explore what makes them so compelling to watch
and be a part of.

Devastated by the sudden death of his parents at the height of The Depression, a young dreamer from the wrong side of the tracks, Jacob Jankowski (Pattinson), abandons his veterinary studies at Cornell University. With no other family, no house, and no money, Jacob stows away on a train carrying the circus performers of The Benzini Brothers Most Spectacular Show on Earth. Hired as a veterinarian to care for the troupe’s animals, Jacob is temporarily filled with the promise of an exciting life that comes with a traveling circus troupe. However, as he builds a rapport and falls in love with the star of the show, Marlena (Witherspoon), they become prey to the circus’s owner, Marlena’s violent and abusive husband August (Waltz). 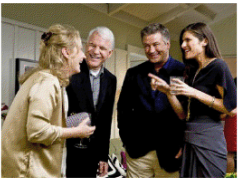 The 2009 comedy, It’s Complicated, stars Meryl Streep as Jane, a woman torn between her cocky attorney ex-husband, Jake (Alec Baldwin), and a mild mannered architect, Adam (Steve Martin). Jake is remarried to a younger woman, but has started carrying on an affair with Jane. To make matters worse, Jane and Jake have three children who are still recovering from their divorce, and Jane has started a relationship with Adam, whom she doesn’t want to hurt. But who should she end up with? 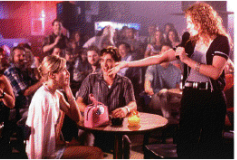 In My Best Friend’s Wedding, Julia Roberts stars as Julianne, a woman who is love with her old college friend, Michael (Dermot Mulroney). Michael is engaged to Kimberly (Cameron Diaz), and Kimberly has asked Julianne to be her maid of honor. So, now Julianne is tasked with being a dutiful bridesmaid, while plotting to ruin the wedding so she can be with Michael. But, will Julianne succeed in sabotaging the wedding? Or will she just ruin her friendship? 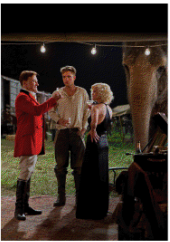 In Water for Elephants Marlena (Reese Witherspoon) is the beautiful star of the show, who is married to the circus’ cruel owner, August (Christoph Waltz). However, when Jacob (Robert Pattinson) comes to the circus as a veterinarian, he and Marlena begin to fall in love, making them both targets for August’s uncontrollable rage and jealousy. How can Jacob and Marlena’s love survive, and will they ever be free from August’s violence and threats? 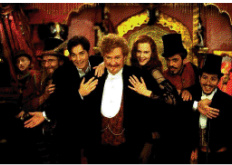 Moulin Rouge!, one of the most entertaining and successful musicals since their heyday in the 1960s, is also one of the most engrossing love triangles to date. Does the show’s star, Satine (Nicole Kidman), fall for the penniless artisan (Ewan McGregor)? Or does she does she go for The Duke (Richard Roxburgh) to gain funding for the Moulin Rouge and become a “real actress?” After The Duke makes a threat on Christian’s life, Satine is torn as to which man she should be with.

In James Cameron’s epic Titanic, we follow a love triangle between upper class Rose (Kate Winslet) – who is set to marry wealthy Cal (Billy Zane) – and the artist, Jack (Leonardo DiCaprio). Though Rose is betrothed to Cal, she forms a friendship with Jack, which quickly turns into a love affair. After Cal discovers their affair (and the ship strikes an iceberg), he tries to frame Jack for stealing a diamond necklace and convince Rose to board a lifeboat… but can she bear to leave Jack on the sinking ship? 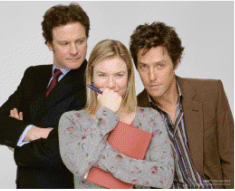 In the adaptation of Helen Fielding’s novel, Bridget Jones’s Diary, Bridget Jones (Renée Zellweger) is torn between the womanizing publisher, Daniel Cleaver (Hugh Grant), and the uptight barrister, Mark Darcy (Colin Firth). In the end, Bridget is forced to choose between Daniel (who cheated on her) and Mark (who likes her “just the way she is”) after the men go to blows over her (and, undoubtedly, over Daniel’s past infidelities with Mark’s ex-wife). Who will Bridget choose? 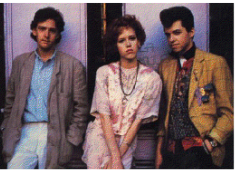 The prep or the geek? That’s the question that Andie (Molly Ringwald) has to ask herself in John Hughes’ classic Pretty in Pink. Andie is smitten with the wealthy, handsome Blane (Andrew McCarthy), but her best friend, Duckie (Jon Cryer) obviously disapproves of her choice to be with Blane. After a betrayal by Blane, who was pressured by his high class friends to dump Andie, she eventually goes to prom with Duckie, where Blane and Andie end up being reunited.

Scott Pilgrim vs The World 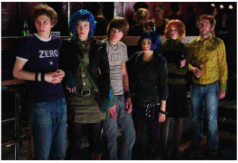 Lovable loser Scott Pilgrim (Michael Cera) has an overly adoring (and young) girlfriend, Knives Chau (Ellen Wong), but when Ramona Flowers (Mary Elizabeth Winstead) comes along, Scott becomes infatuated with her, which makes him lose interest in Knives. After finally breaking it off with Knives, and while battling Ramona’s seventh evil ex, Knives attacks Ramona and Scott is finally forced to tell the girls that he cheated on them with each other. But who, if anyone, will Scott end up with? 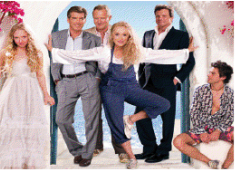 Another of Meryl Streep’s films, Mamma Mia! (which is based on the music of ABBA), might be more of a love square than a love triangle as Donna (Streep) is unsure of who the father of her soon-to-be-wed daughter is, and all three of the men have been invited to the wedding! Is it Sam (Pierce Brosnan), the architect, Harry (Colin Firth), the banker, or Bill (Stellan Skarsgård), the adventurer? More importantly, who will Donna choose to be with now? 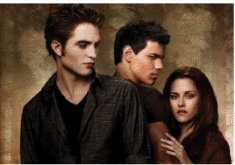 Perhaps the most talked about love triangle in recent years is in The Twilight Saga. Fans of the series either identify as Team Edward, or Team Jacob, and for good reason: first, we had the all-consuming love between Bella Swan (Kristen Stewart) and Edward Cullen (Robert Pattinson). But in New Moon, after Edward leaves in order to protect Bella, Bella finds comfort in her friend, Jacob Black (Taylor Lautner), and is later forced to choose between the two. But will she choose vampire or werewolf?