Home » Mom Life » Lifestyle » Hungry Jack Racing, and What I Learned About NASCAR 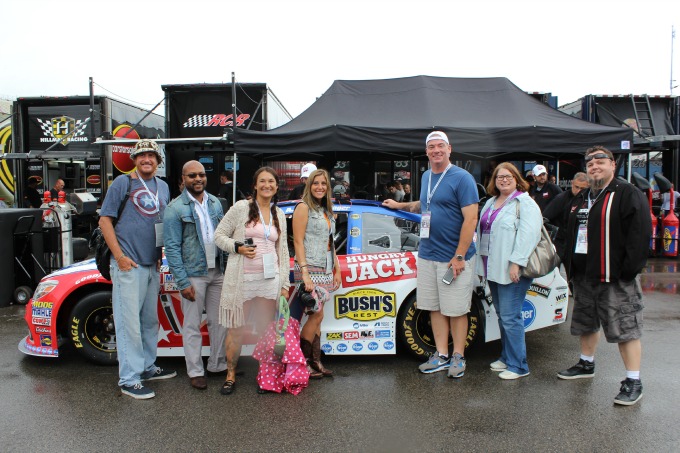 Recently, I had the opportunity to attend my first NASCAR race at Michigan International Speedway. I was there with a small group of bloggers (the good looking group in the picture above) and some very nice folks from the J.M. Smucker Company. This trip was a perk from my new partnership with the J.M. Smucker Company as a “Be Your Own Jack” Brand Ambassador for Hungry Jack. I am so happy to be a part of this family. As someone who often feels shy and insecure when in a group of people that I don’t know, it was nice to be made to feel so at home.

The JTG Daugherty Racing Team graciously also hosted my group for this NASCAR race in Michigan. On the day of my arrival, JTG Team owners, Tad and Jodi, joined the us for dinner. They are the nicest people you will ever meet and so down to earth. Plus, they love rescue dogs which immediately makes them my kind of people. 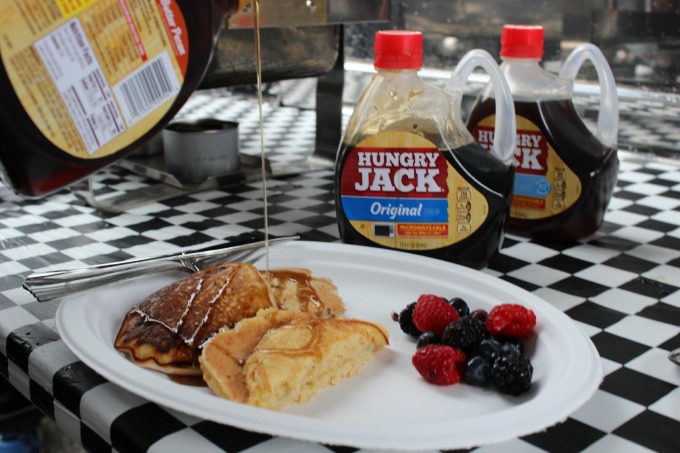 The morning of the Quicken Loans 400 Race, the JTG Team had us over for a Hungry Jack pancake breakfast at their motor coach. With all the excitement of the race ahead, a hearty pancake breakfast is just what we needed.

Pancakes are one of the few things I could eat for breakfast, lunch or dinner. Pancakes and NASCAR go so perfectly together.

You’ll never guess who stop by for breakfast! 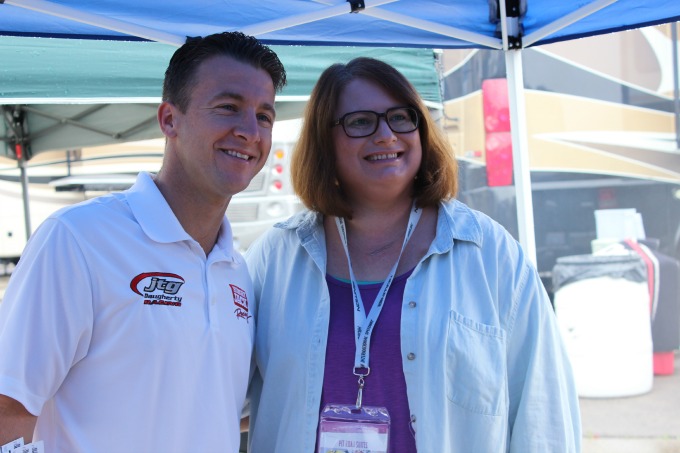 That’s AJ Allmendinger, the driver of JTG Daugherty Racing’s No. 47 Chevrolet. He is so nice and very passionate about what he does. At breakfast he spoke a bit about racing and his upcoming day on the track. But what I remember most is what he said about the people he works with. AJ shared how much he cares about the JTG Daugherty team. They are one big family.

Before the race, we toured the massive garage area where teams prepped their cars. It was impressive. I had no idea of how much goes into one of these races. The teamwork involved is like nothing I seen. These people are dedicated and with one goal in mind. Winning the race. 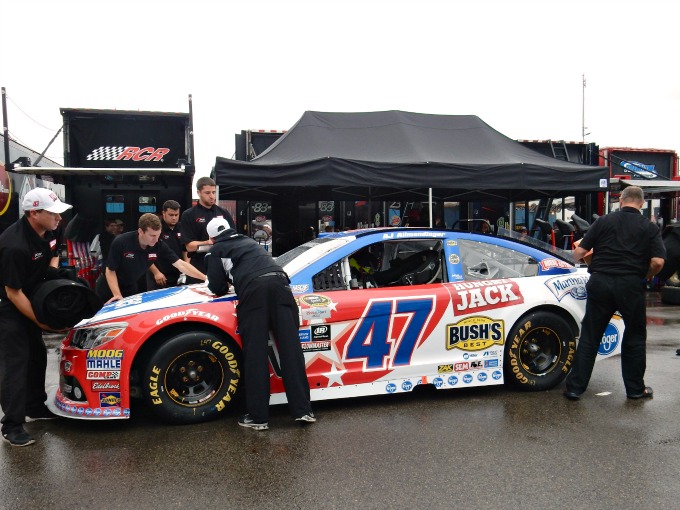 Each person brings a special skill set to the team and they all work together in harmony. For example, there is one person who does all the electrical on the car. Another person does nothing but brakes. All are important. NASCAR racing is without doubt a team sport, just as much as basketball and football. I had no idea.

Of course, while touring the garage area, I stopped to pose for a pic with a couple of my favorite blogging friends. 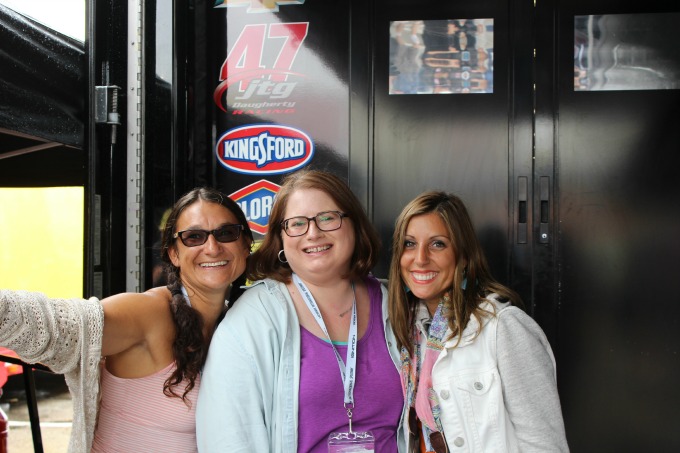 Just before the race, we went down to the pit area where we learned more about the mechanics of the race. I was impressed to learn how much the pit crew trains and prepares for a race. These guys are strong, they are fast, and they are dedicated. Some wear head to toe fire protection all day, in the blazing heat, and still manage to do a very physical job.

I don’t think I could change my own tire if I had to. These guys change 4 tires and fuel the car in as little as 11.5 seconds. That’s insane! 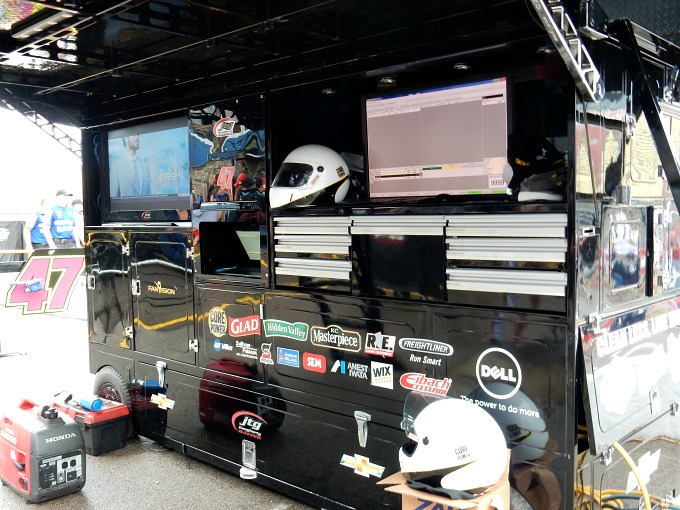 It was exciting seeing the pit crew in action. Those guys can hustle! The teamwork is impressive. 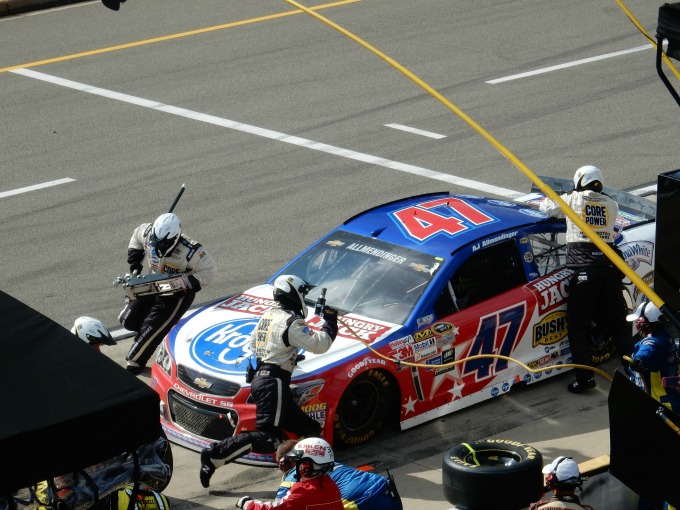 We also discussed the strategy that goes into winning a race. Something as simple as whether or not a driver chooses to make a pit stop for fuel, can determine the outcome of the race. 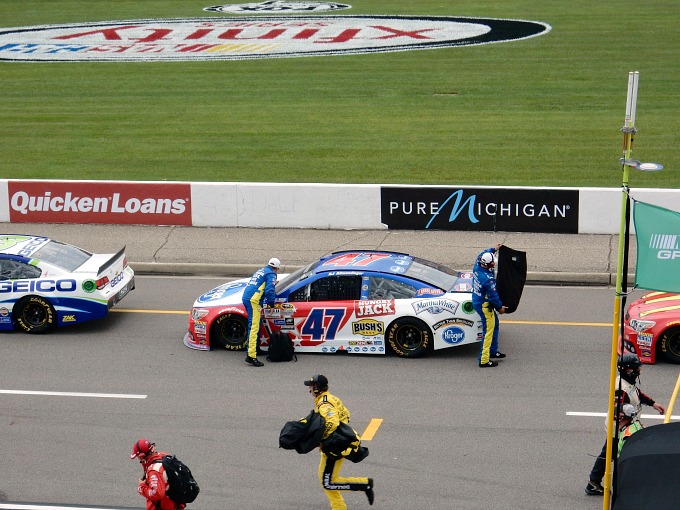 It was a rainy day at the Michigan International Speedway. There were a lot of delays, but when the cars raced around the track at a dizzying speed it was mesmerizing. It was also very loud. 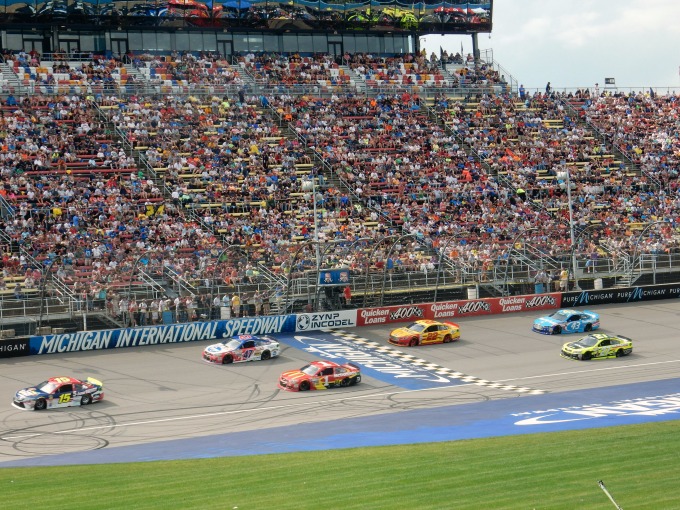 I had no idea NASCAR was so much fun. I come from a family of NASCAR fans, but I never thought it would be for me. I can admit when I’m wrong about something and in this instance I couldn’t have been more wrong.

My son, dad and sister were so excited when they heard I was going on this trip, and now I understand why. 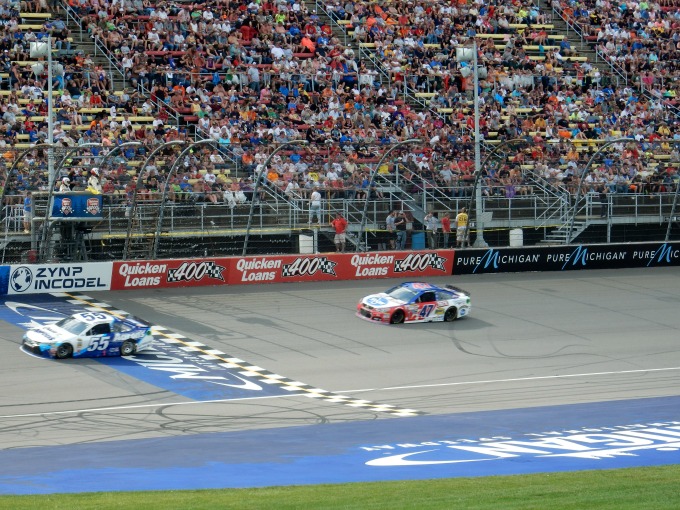 We had the luxury of staying in a suite for the race, but I loved going up to the roof to watch. 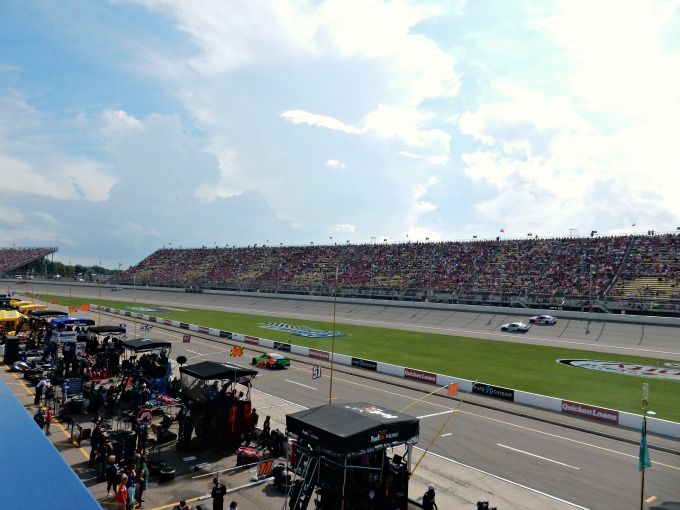 More than anything, what blew my mind was the vast number of fans who show up for NASCAR. People camp out for days, and there were RVs and campers as far as they eye could see. The bleachers stretched all around the massive track and they were filled with elated fans.

There were so many families enjoying the race. Smiling kids were everywhere. It was nice. NASCAR is such a great a family sport. It’s no wonder that the J.M. Smucker Company and Hungry Jack brand have chosen to be a part of it.

Disclosure: About a Mom is a paid ambassador for Hungry Jack.