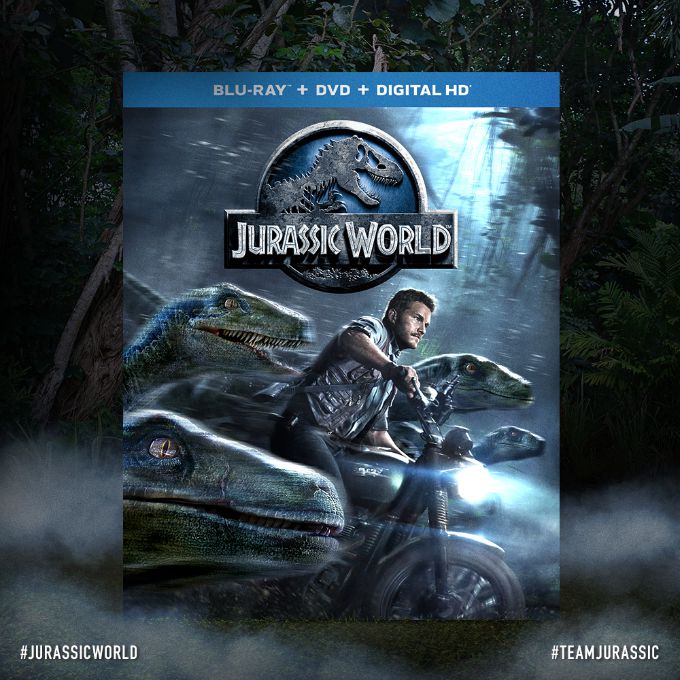 For all you Jurassic World fans, I have exciting news! The biggest movie of the year proves that once again, dinosaurs rule the earth! I have partnered with Universal Pictures Home Entertainment to share that Jurassic World is coming to DVD and Blu-ray on October 2oth. Experience JURASSIC WORLD in stunning hi-definition with the Blu-Ray Combo Pack in limited edition collectible steel packaging.

Shattering records globally, Jurassic World crushed the opening-weekend box-office, scoring the highest domestic, international and worldwide openings of all time. The film has taken in more than $1.6 billion globally to become the third-highest grossing film in history. Now fans can experience the thrill and awe when Jurassic World arrives on Digital HD on October 1, 2015 and on 3-D Blu-ray™, Blu-ray™, DVD and On Demand on October 20, 2015.

Check out the awesome bonus features available only to Blu-ray and DVD:

• WELCOME TO JURASSIC WORLD: An in-depth take on the creation, look and feel of Jurassic World. Director Colin Trevorrow and Steven Spielberg discuss how the idea of the film came together and how the casting was decided with actors’ commentary on their roles and filming locations.
• JURASSIC WORLD: ALL-ACCESS PASS: Chris Pratt and Director Colin Trevorrow discuss key moments in the film, supported by behind-the-scenes footage and VFX breakdowns.
• INNOVATION CENTER TOUR WITH CHRIS PRATT: Chris Pratt gives a tour of the Innovation Center, a museum/exhibit, built just for the movie.
• JURASSIC’S CLOSEST SHAVES: Clips from all films in the franchise showing “near death” or extremely scary encounters with dinosaurs.

• DELETED SCENES
• DINOSAURS ROAM ONCE AGAIN: Behind the scenes look at the making of Jurassic World’s visual effects, how the dinosaurs came to life, and actors filmed scenes.
• CHRIS & COLIN TAKE ON THE WORLD: Chris Pratt and Colin Trevorrow (Director) interview each other and discuss Jurassic World as well as the other Jurassic Park movies.

For more information on Jurassic World, follow these social channels: