Spending a lot of time with my two teenage nieces, I can’t help but be caught up in the excitement of The Hunger Games. With the latest film “Catching Fire” due to release on November 22, 2013, the excitement around here is building. Thanks to Internet Explorer and Lionsgate, we now have one-stop online access to get all the latest content in an interactive and rich experience with ‘The Hunger Games Explorer’. This site is pretty cool, so you’ll want to read on if you’re a Hunger Games fan. 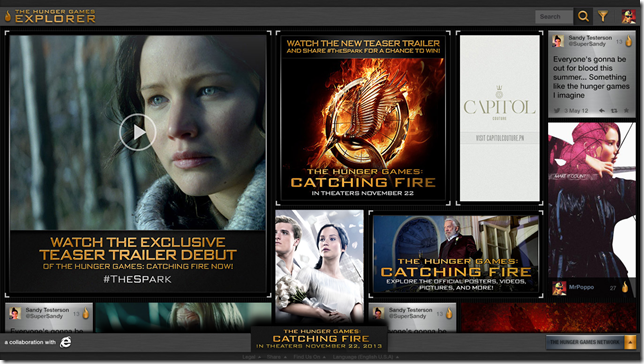 A one-stop-shop for all things Katniss, Panem, and District 12!

The Hunger Games Explorer is designed to showcase the power of Internet Explorer 10 and touch-screen tablets like the Surface RT, although it works with other browsers. The site is a catch-all of videos (including the trailer for the new movie), Tweets, feeds from fan sites, exclusive photos, posters, and official updates.

When a fan enters The Hunger Games Explorer, they can manipulate the site to customize “The Hunger Games: Catching Fire” info exactly how they want it – they can tailor and filter content in and out of their stream, pull in fan blogs and tweets in addition to messages from the Capitol, and interact with other fans across the globe.

The Hunger Games franchise has such a young fan base. With today’s young people so engulfed in social media, I imagine the social media aspect of this site will be a major draw. I’m sure as the release date of “The Hunger Games: Catching Fire” approaches, we’ll be on this site a lot.

If you haven’t seen the new “The Hunger Games: Catching Fire” trailer, be sure to check it out at The Hunger Games Explorer! See this full story on The Windows Blog.