Home » Entertainment » Transformers: Age of Extinction in Theaters on June 27, 2014

Being the mom of a boy is awesome, and I wouldn’t trade it for anything in the world. Getting to jump, yell and scream like a lunatic whenever my son made a big tackle or crossed the goal had it’s perks. Then there are the toys. In my opinion boy toys are way cooler than girl toys. Race cars, fire trucks, and robots can be so much fun. Over the years, I have spent countless hours sitting on the floor with my son building things, often times just sitting back in awe of his imagination.

Boys like to watch exciting, action packed television shows and movies. My son has always been a huge fan of the Transformers cartoon and movie series. He grew up watching them both, and loved playing with his Transformer toys. Having shared this Transformers passion with him over the years, I am just as excited as my son about the release of TRANSFORMERS: AGE OF EXTINCTION to theaters on June 27, 2014. I’m so glad to partner with Paramount Pictures to tell you a bit about the movie. 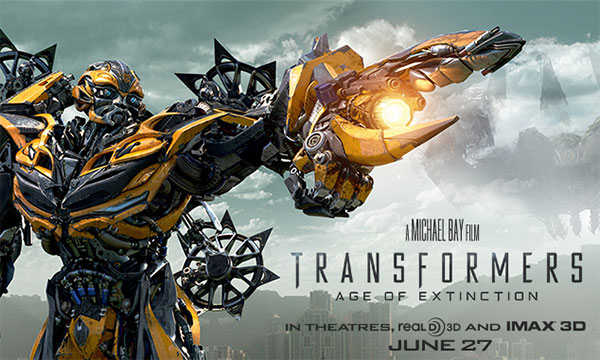 Here’s the movie synopsis: TRANSFORMERS: AGE OF EXTINCTION begins after an epic battle left a great city torn, but with the world saved. As humanity picks up the pieces, a shadowy group reveals itself in an attempt to control the direction of history…while an ancient, powerful new menace sets Earth in its crosshairs. With help from a new cast of humans (led by Mark Wahlberg), Optimus Prime and the Autobots rise to meet their most fearsome challenge yet. In an incredible adventure, they are swept up in a war of good and evil, ultimately leading to a climactic battle across the world.

TRANSFORMERS: AGE OF EXTINCTION is the fourth film in director Michael Bay’s global blockbuster franchise. Mark Wahlberg, Stanley Tucci, Li Bingbing , Kelsey Grammer, Sophia Myles, T. J. Miller, Nicola Peltz, Jack Reynor and Titus Welliver star. The film begins after an epic battle that left a great city torn, but with the world saved. As humanity picks up the pieces, a shadowy group reveals itself in an attempt to control the direction of history… while an ancient, powerful new menace sets Earth in its crosshairs. With help from a new cast of humans, Optimus Prime (voiced by Peter Cullen) and the Autobots rise to meet their most fearsome challenge yet. In an incredible adventure, they are swept up in a war of good and evil, ultimately leading to a climactic battle across the world.

You don’t have to be a boy or the mom of a boy to enjoy the Transformer movies. I have watched all three of the the previous Transformer movies (more than once) and think anyone would find them entertaining. It’s going to be interesting to see an all new cast, although I have full confidence that Mark Wahlberg and company will do an amazing job.

Check out this clip from the film called “I think we just found a Transformer.”

All three generations of my family will be heading to the theater this weekend. My nieces are have really been looking forward to this one. Even Grandma Laura is super excited about the movie, although I think she’s mostly interested in watching Mark Wahlberg again on the big screen. (wink) My big boy is all grown up now and will be watching the movie with his friends in Nashville this weekend. I can’t wait to talk to him about it on the phone on Sunday night.

Keep in mind that the movie is rated PG-13 for intense sequences of sci-fi violence and action, language and brief innuendo. You know what your little can handle. If you want to know more about the film, Fandango has a Transformers: Age of Extinction Page on their site you should check out.

Transformers: Age of Extinction is in theaters 06.27.14

Will you be going to see the movie this summer? Also, I’m dying to know. Who’s your favorite Transformer? I’m kinda partial to Bumblebee myself.

This blog post is part of a paid SocialMoms and Paramount Pictures blogging program. The opinions and ideas expressed here are my own.