This is the BEST Buttercream Icing recipe. It is the only buttercream frosting recipe you’ll ever need. This easy vanilla buttercream tastes just like the frosting you get from a bakery. The stuff that comes in a can doesn’t come close!

I had been using the same buttercream icing recipe for many years. Everyone always enjoyed my icing — at least they said they did. But recently I needed to make cupcakes for a friends Bon Voyage party at work and something prompted me to try a new recipe.

This buttercream icing recipe uses a combination of shortening and butter. I couldn’t believe all of the raves over my new frosting when all I did was substitute half of the butter for shortening.

Why use shortening in buttercream icing?

Shortening plays an important role in baked goods, not just frosting. In frosting, it really helps bring out the delicious finger-licking good flavor without it being overly sweet. Shortening also helps frosting get a creamy, smooth texture. Most importantly, though, shortening adds stability to icing. While butter tastes amazing, it is susceptible to hot and cold temperatures. The shortening in the frosting can withstand the fluctuation.

Two of my other favorite desserts to make are Coconut Cake and Cherry Chocolate Cake with Fudge Frosting. They are both TO DIE FOR.

I feel like I’m being so dramatic while I write this post. Talking about desserts has a tendency to bring that out in me.

How many types of buttercream icing are there?

There are several types, each with its own personality.

It’s definitely the best buttercream icing recipe I have used to date, so I figured I would share it with you. It’s really simple to make and it’s quite possible that you already use this recipe, but I thought I’d share it with you anyway, since it went over so well.

What can I add to buttercream frosting?

You have a plethora of options when it comes to personalizing buttercream frosting. Just be sure to add in small amounts and then sample so that you don’t overpower the taste of the frosting.

How much buttercream frosting does this recipe make?

This recipe should make enough Best Buttercream Icing to cover a 9″ x 13″ sheet cake or a two-layer 8″ cake. If you are making cupcakes, you should be able to frost 24 cupcakes if you apply the frosting with a knife. If you swirl the icing on the frosting with a pastry bag, you will have enough for 12-15 cupcakes.

How to Store Buttercream Icing

I usually store my buttercream icing in an airtight container in the fridge for up to a week. When I am ready to use it, I just let it come to room temperature and give it a good stir to loosen it up. If the icing is too stiff, the easiest is to add milk or heavy cream to thin it out. You can also re-whip the icing using a mixer to make it fluffy again but it is usually not needed.

If you want to store buttercream icing for a longer period of time, you can freeze it for up to three months in a Tupperware. You will need to let it thaw in the fridge.

Only use butter that has achieved room temperature. If the butter is even slightly refrigerated, the emulsion process may not hold and the icing elements will separate. The inclusion of shortening helps combat this.

Try my other baking recipes: 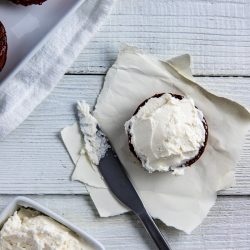 About a Mom
This is the best buttercream icing recipe and the only buttercream frosting you'll ever need. It is simple to make and glides onto your cake or cupcakes.
3.88 from 8 votes
Print Recipe Pin Recipe
Prep Time 10 mins
Course Dessert
Cuisine American
Servings 2.5 cups

Keyword buttercream frosting, buttercream icing, frosting recipe
Tried this recipe?Let us know how it was!