Did you know there are currently more tigers living in captivity than in the wild? Big Cats everywhere are in danger of extinction, and as a National Geographic Insider, I am excited to share some news about Big Cat Week on Nat Geo Wild. Starting Friday, November 29 (the day after Thanksgiving), Nat Geo Wild is kicking off Big Cat Week with Man Vs. Cheetah at 9:00 PM ET/PT.

Last week I had a wonderful opportunity to chat on the phone with National Geographic Explorer, Luke Dollar, who heads up the National Geographic Big Cats Initiative. It was a very eye opening conversation, to say the least. Through his work with NG’s explorers in residence Dereck and Beverly Joubert, in the field of Africa, the Big Cat Initiative was established to do something about the dwindling number of Big Cats in the wild. 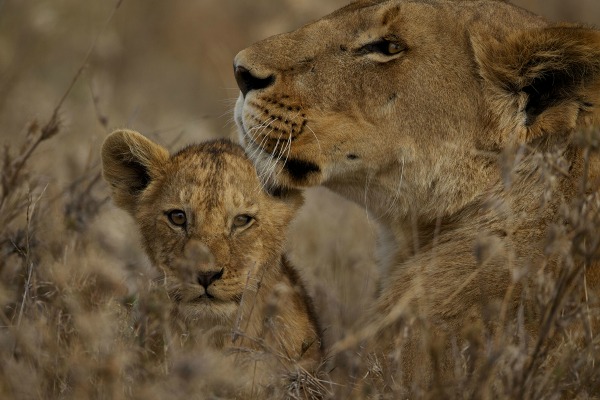 A lion and her cub. Photo credit: © Daniel Stone and Spencer Millsap/National Geographic

Since the Big Cats Initiative [BCI] was established in 2009, there have been results in stopping the decline of big cats (cheetahs, lions, tigers, snow leopards) in their natural habitats. The BCI operates on three pillars of focus: Assessment, Protection, an Communication.

What are the biggest threats to big cats? 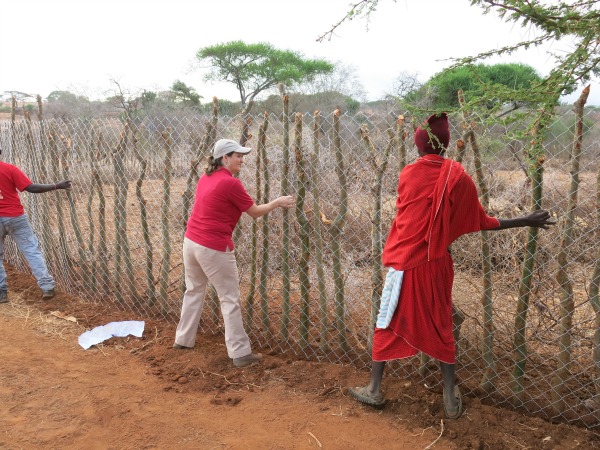 A big threat to big cats is their conflict with humans. One of the most cost-effective means to protect the lions is to build Boma fences to protect livestock so that the herders don’t retaliate by hunting lions. Build a Boma is a targeted and effective campaign in reducing that conflict.

Boma fences – goal is to create a nonpermeable fence to protect livestock from getting out and lions from getting in. Usually just thorny bush that is gathered to keep livestock in and lions out. About 75 meters in circumference. Fortified by chain link fences or living wall format – trees that grow into a fence.

Can you help build a boma? It costs $500 to build a boma. A boma has a 20 year lifespan and has a very high effectiveness rate. It’s a simple solution that really works! They need thousands of bomas. This would be a great fundraising project for classrooms, sports events, and clubs.

Learn more about this amazing initiative by visiting the Build a Boma official web site and causeanuproar.org. 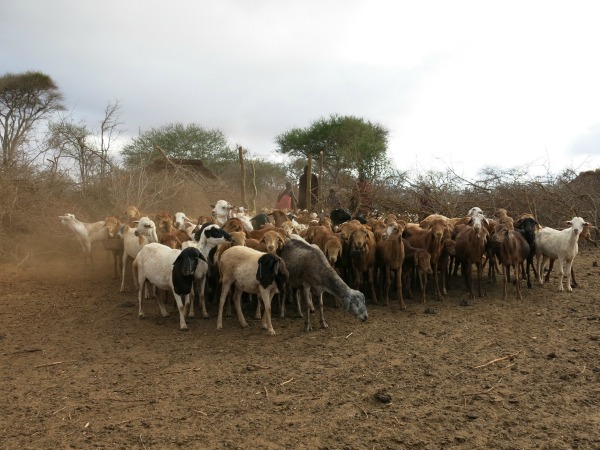 Livestock gathers inside an enclosure called a “boma,” which is designed to protect the animals from attack by predators, thereby sparing lions from retaliatory killings. More information is available at CauseAnUproar.org. Photo credit: © Daniel Stone and Spencer Millsap/National Geographic

Tune in to Big Cat Week on National Geographic Wild

Take nature’s fastest land mammal vs. two of the quickest and most elusive athletes in all of professional sports: who wins … and what shocking secrets are revealed? Nat Geo WILD gets a front row seat as the Tennessee Titans’ Chris Johnson — the NFL’s fastest running back — and the Chicago Bears’ Devin Hester — the super-agile wide receiver and kick returner — take part in an extraordinary first-ever one-on-one challenge against a cheetah. It’s the race of a lifetime that has never been attempted before as cheetahs from Busch Gardens Tampa’s Cheetah Run attraction race NFL’s finest. Who will win? Could a human beat the animal kingdom’s fastest cat? Anything is possible.

Take Kobe Bryant’s ability to jump, add Michelle Kwan’s grace and beauty, then mix well with Stephen Hawking’s problem-solving genius — and you’ve got the recipe for Super Cat. We’ve combined the most amazing features of big cats to showcase the most awe-inspiring capabilities ever seen in action. Watch this ultimate feline live all nine lives as its superpowers of strength, endurance and stealth are put to the test.

Soon after the summer rains have fallen, lioness Manyari’s pride faces trouble when two nomadic males seek a pride of their own to lead. With a sixth sense for imminent trouble, Manyari makes a bid to escape to ensure the survival of her young cubs. Forced to fend for herself and her cubs alone in the wild, Manyari sacrifices her own security for her offspring’s safety. Constantly looking for food and shelter, and doing her best to stay out of marauders’ lines of sight, this former queen and her cubs make the odyssey to find safety and security.

Wolves and cougars are increasingly at war because wolf packs continue to multiply and spread into parts of the Rocky Mountains dominated for decades by cougars. Now, big cat wrangler Boone Smith tracks the most recent wolf and cat skirmishes as he delves into why these two big predators carry on the cats vs. dogs rivalry. In his big cat forensic investigation, Boone’s goal is to pinpoint the places where cougar-wolf conflicts most often occur by gathering clues about each creature’s hunting, feeding and fighting behaviors. Boone applies all the skills he’s acquired tracking big cats around the world to unravel the truth about what happens in a cougar v. wolf showdown.

From award-winning filmmakers and National Geographic Explorers-in-Residence Dereck and Beverly Joubert comes their next feature film, exclusively for Nat Geo WILD. According to Dereck Joubert, there are 20,000 lions left on Earth. Only 3,500 of those are males. Although they are born at a 50/50 ratio, by the time they reach maturity, only one in eight male lions survive. We follow the journey of the lives of young males in the African bush and their potential to be king. From the birth of a male to his exile from his pride, our cameras follow along as males roam the jungles in an effort to spread their bloodlines through the kingdom. The Jouberts take an unflinching look at what happens to these lions in this spirited, moving and heartbreaking film.

“If it hadn’t been for Hollywood, I’d have fulfilled my other childhood dream … to be a zookeeper,” says Betty White when speaking about her love for animals. We take a rare look into one of White’s true passions — big cats! Head with her to the Los Angeles and San Diego zoos to get up close to big cats. White weaves her natural wit as we look at the cats’ individual behavioral traits and learn where they live, how many are left in the wild and the challenges they face.