If you have never been to Universal Orlando, your family is in for a treat! There is so much to do and so much to see it is well worth the visit. 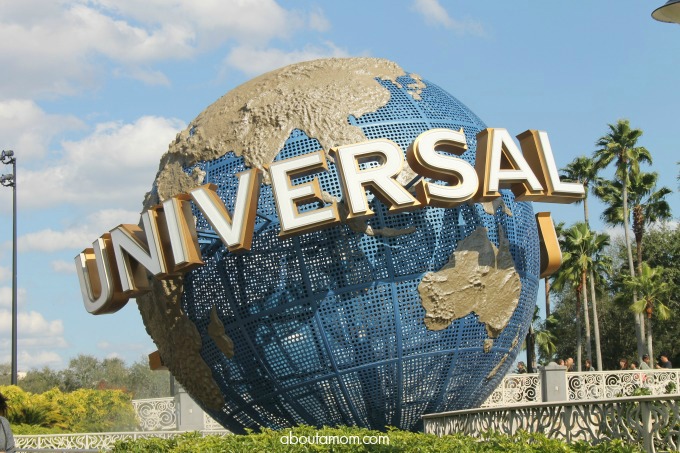 Because it is so big, having a full area of things to do even before you get into the parks, and then two theme parks in one place, that it can be overwhelming and a daunting task to go the first time. It’s hard to make decisions and be sure of what to do first, but manage your time so that you don’t miss anything.

Now, before you even enter the parks themselves, you encounter an area called City Walk that you can easily spend most of the day in if you chose to. It’s full of really neat shops, a movie theater, mini golf and lots of awesome restaurants. It’s a great place to hang out at night after the park, to wind down as well. So take advantage of that, especially if the park you are visiting closes fairly early as they do in the slower months.

I am going to give you some tips and recommendations to help your experience. My family has season passes and we have visited numerous times.

First of all, you will want to download the free Universal app on your phone. It is very helpful and will answer a lot of questions you may have, like what kind of food is at each restaurant, how long the line for a ride is right at that moment, and more.

Now, when you first get there, you do have the option to buy a ticket to either parks or just one. If you do both parks, one thing you certainly do not want to miss it that they have the Hogwarts express train that you can ride between the parks. You can only ride this train if you have that type of ticket and it is very fun, but it also saves you a ton of walking all the way around! It is also different each way, so if you can, ride it both ways.

Universal Studios is a great park all by itself, though, so if you only buy one ticket and choose it, you will not be sorry. There is plenty to do, and many things for each age group as well.

So first let’s start with things to do with smaller kids. There are definitely a few that can easily be missed, that your kids will truly enjoy. One is the Woody Woodpecker roller coaster.  It’s a classic coaster, nice and small but very fun for everyone. Next to that is a wonderful play area in the theme of Fievel and the American Tail. Everything is made to look giant so you feel like you’re the mouse’s size. There are tunnels, slides and more for them to run and play in.

Then, there’s also a Sponge Bob store and the characters come out and take photos many times throughout the day. They are really great with the kids and very funny to watch!

And On the other side of the park, if you had chosen to walk straight down the middle instead of turning down Hollywood Blvd, you come to the Minions and Shrek 4D shows. Both a great but sometimes both have very long lines. They are good for all ages and because they are in the front of the park, they do tend to stay busy. If you have to choose just one, for time’s sake, go with the Minions. The line itself has lots to look at and they move you from room to room and it’s nice and cool in there, so you don’t mind as much as the ones with outdoor lines. It’s kind of a ride, but more of a show. You are made a minion as you watch. It has bubbles, and lots of cool effects. Plus, of course, it’s hilarious. 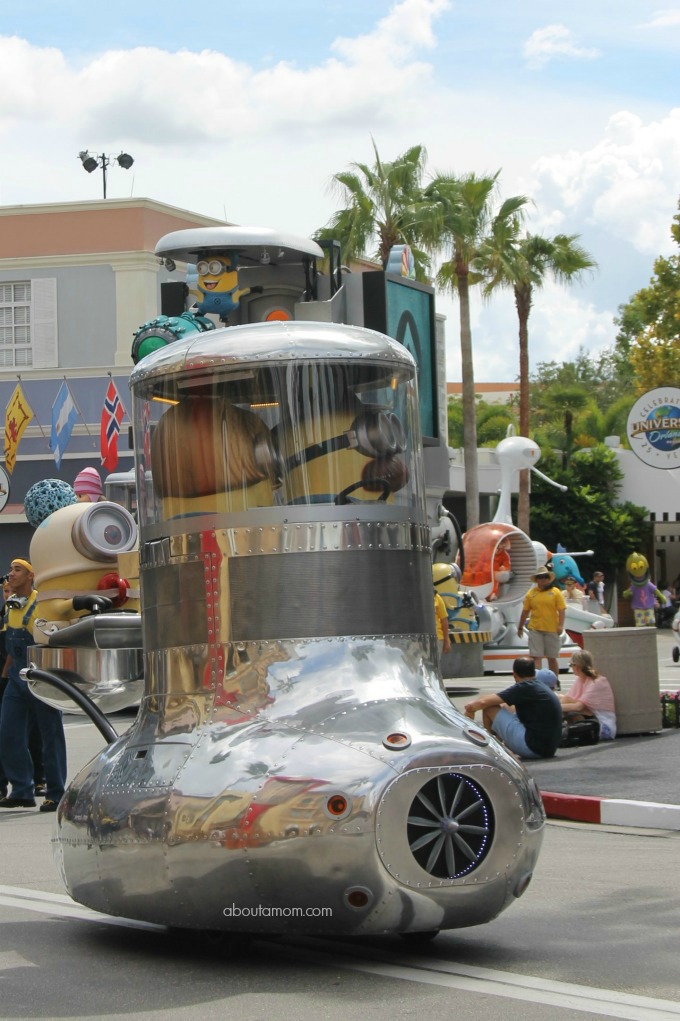 One thing your whole family will love and be able to do together is to watch the parade, which happens every day two times. It’s a lot of fun to see and as long as you get yourself a good spot a few minutes beforehand, you’re good to go. It’s not like Disney, where you have to be on the curb an hour before to be able to see anything. They have floats from Despicable Me, Dora the Explorer, Sponge Bob, and the bunnies and chicks from Hop. The floats are awesome but the best part is the characters dance and when the parade stops here and there they are very friendly and will pose with you, dance with you and make you laugh. 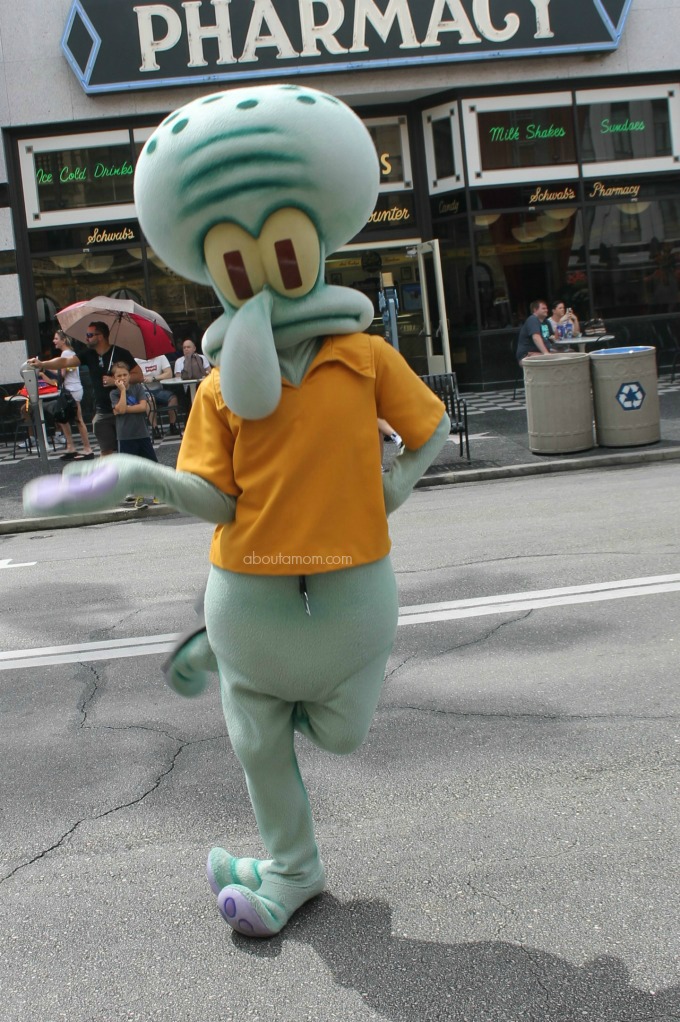 There are a few great shows you will want to check out also. There is a Pet Stars show, which is easy to miss, where it is located in the back. They change it from time to time and you never know which famous movie pets will be taking part in it, but we have seen several and it is hilarious to watch and they do keep a few of them out for you to take pictures of at the end. For example, the dog from the Men in Black films is there from time to time. Your whole family will enjoy the show, and if it’s hot out that day (as it is most days in Florida!) you will be happy for a break to sit down and rest and relax for a few. 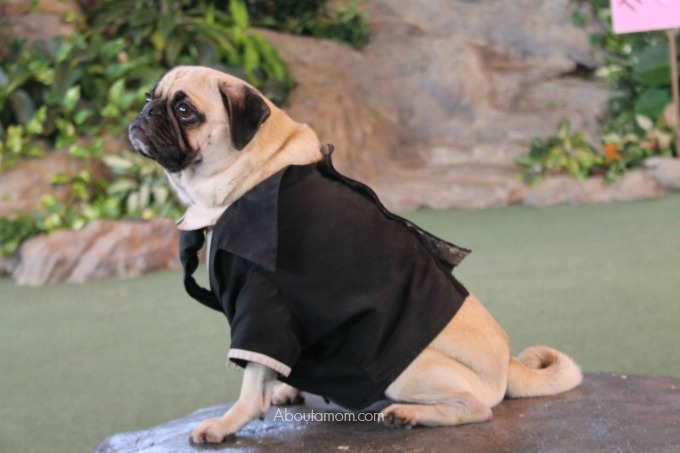 Then at the back of the park, there are a few great ones that happen on the street. One is a fish market show where they do a ton of jumping, flipping and fish throwing stunts. It’s super entertaining and it’s not very long either. Also, there is a great drumming show with “construction workers” on the scaffolding up on the side of a building that is fantastic. Those two shows happen right near each other too, so check the times so you don’t miss them. 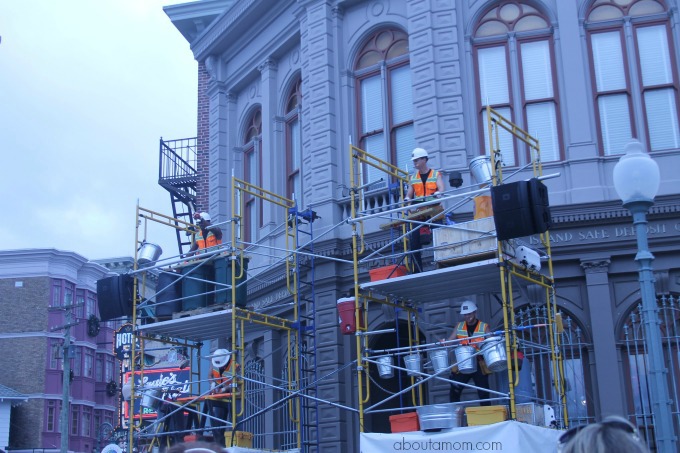 There is a good sized section dedicated to the Simpsons, with two rides, one is more of a standard kids ride than the other, so be sure if you have smaller kids to take them on that.

The Men in Black ride is a great one for the family to do together. You shoot at aliens and compete for highest score and it’s very fun. (Think Disney’s Buzz Lightyear ride.) 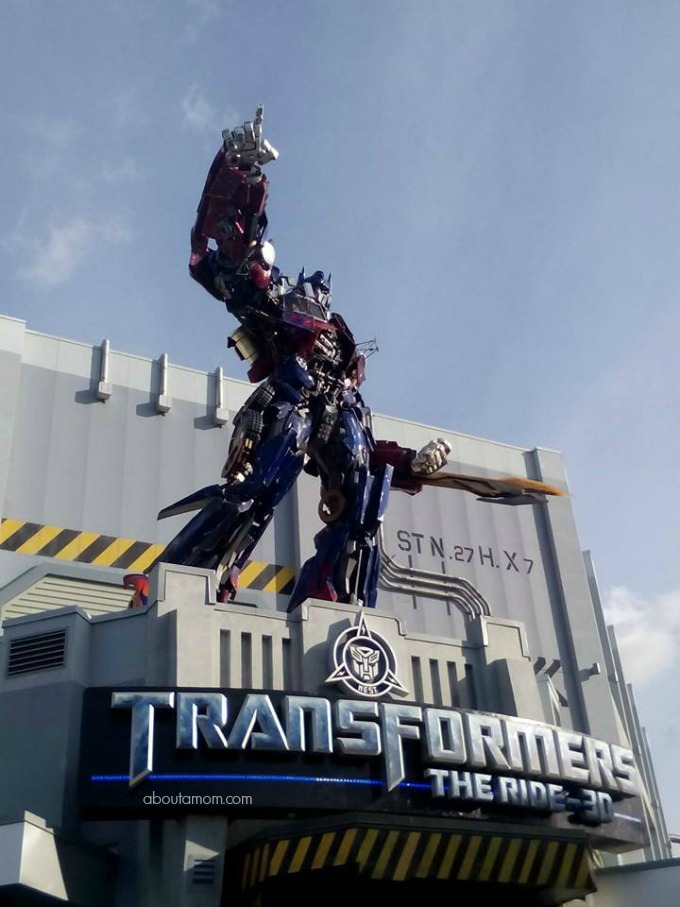 There are a few other really great rides for older kids and adults too, like the Mummy coaster, which is inside and in the dark and is very fast, the mega-fast Hollywood Rip Ride Rockit, where you get to choose your own song to play while you ride, and the Transformers Ride. 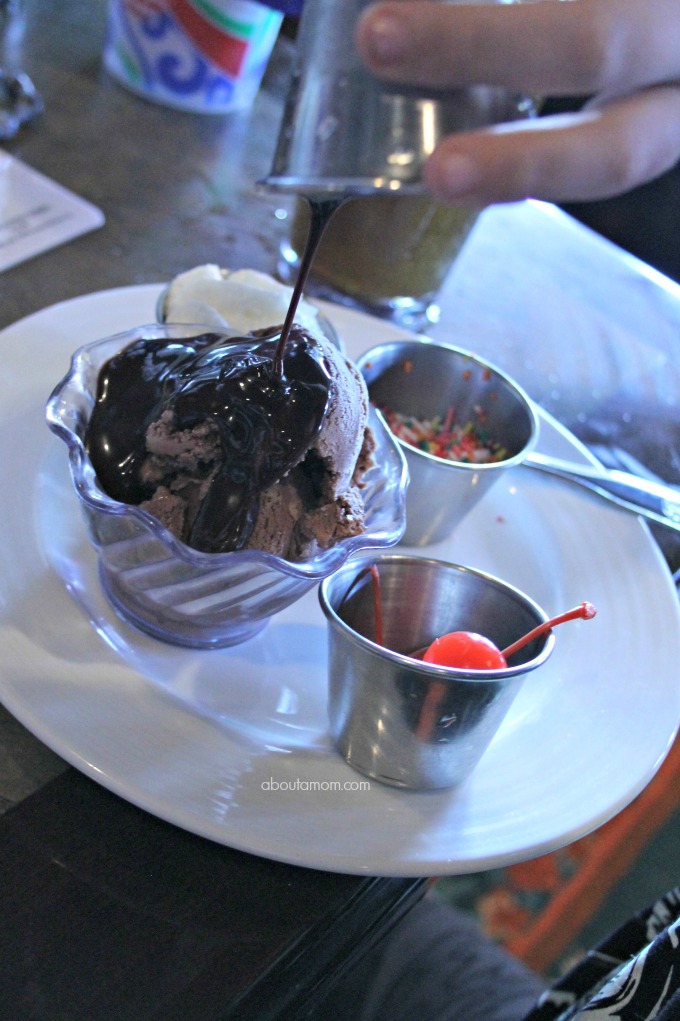 There are so many places to eat in the park, with many different price options, plus the dining plan they offer. But, if you are in the mood for more of a fine dining experience, Lombard’s seafood is wonderful. It’s towards the back area and has a dock that hangs off into the water. If you eat there on your birthday they bring you a great ice cream sundae “bar” right to the table. My kids loved that!

One of the main attractions there in the park of course, is Diagon Alley in the Wizarding World of Harry Potter. Do not miss this, even if you aren’t a huge Potter fan, it’s well worth seeing anyway. If you are a huge fan, get ready to be blown away. 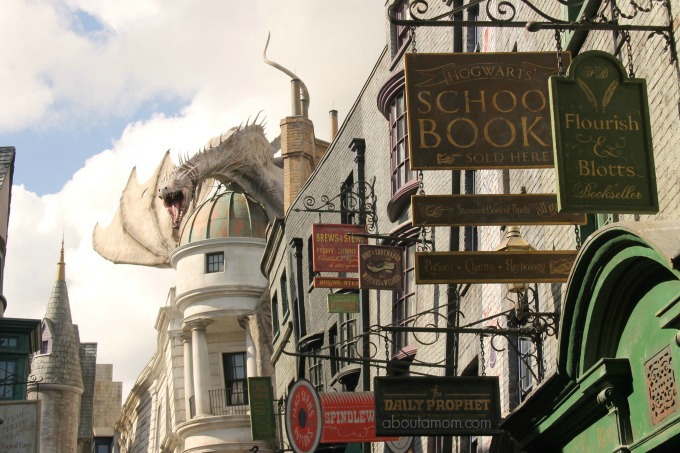 When you are in the back area of the park streets, where you watch the fish throwing show and there are lots of restaurants, you will see the London train station, where the Hogwarts express comes in to the park and you will also see the Knight Bus across from it. Both of these are great to see but they are the only part of the Wizarding world that shows from there. You have to find the opening to get into Diagon Alley. Once you do, you will be amazed at how much it feels like another world as you enter it. The detailing is by far, one of the best areas in the park. Even the coloring itself on the buildings and signs is totally different. 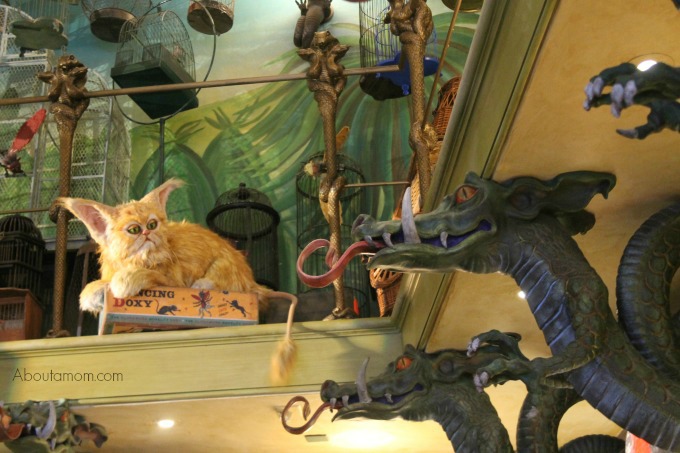 The Escape from Gringotts ride is a must do. You can’t miss it either, because there is a huge, and I mean huge, dragon sitting on the top of the bank. If you stand there are watch him, he will eventually breathe some fantastic fire as well! The ride is good for most ages, and I would say if you just go by the height requirement, you’ll be good to go as far as judging. My son who doesn’t like a lot of rides, loves this one. We never miss it.

Also, if you have a big Potter fan with you and have the money to spend, they sell interactive wands, which are very cool. You can use them in both parks also, casting spells in specific places. Even if you don’t purchase one, you can look for the medallions on the ground that show where the spells can be cast, and watch for someone else to come up and cast one. Very entertaining! 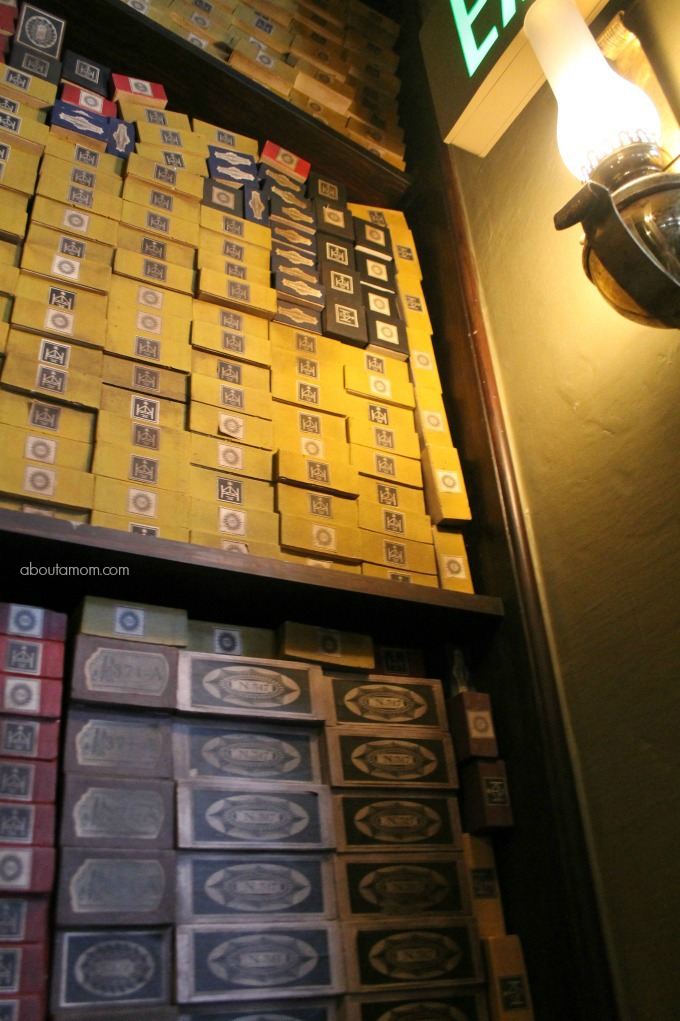 There is of course, a plethora of shops with Potter clothing, robes, regular wands, and more. There’s a great candy and fudge shop and a pet shop, too! Be sure to look in all the shop windows as they are each really awesome. Also, there is an Ollivander’s Wand show and shop to go in where there are brooms sweeping upside down on the ceiling.

So, I hope these recommendations will help you along your journey, and as I said there is so much more to do as well, but be sure to make time for the things most important to you!