This post about our Percy Jackson-inspired visit to the art museum is sponsored by Disney Book Group.

We’ve been reading the best-selling Percy Jackson & the Olympians series by Rick Riordan all summer long and it has been quite an adventure. I’ve done my best to read along with my daughter, even playing catch-up at night listening to it on Audible, but it’s been difficult to keep pace with her. She’s been so eager read these books. I didn’t want to hold her back.

It makes me so happy when we find a series like Percy Jackson & the Olympians that she really enjoys. If you have a middle grader at home, you’ve got to check out these books. 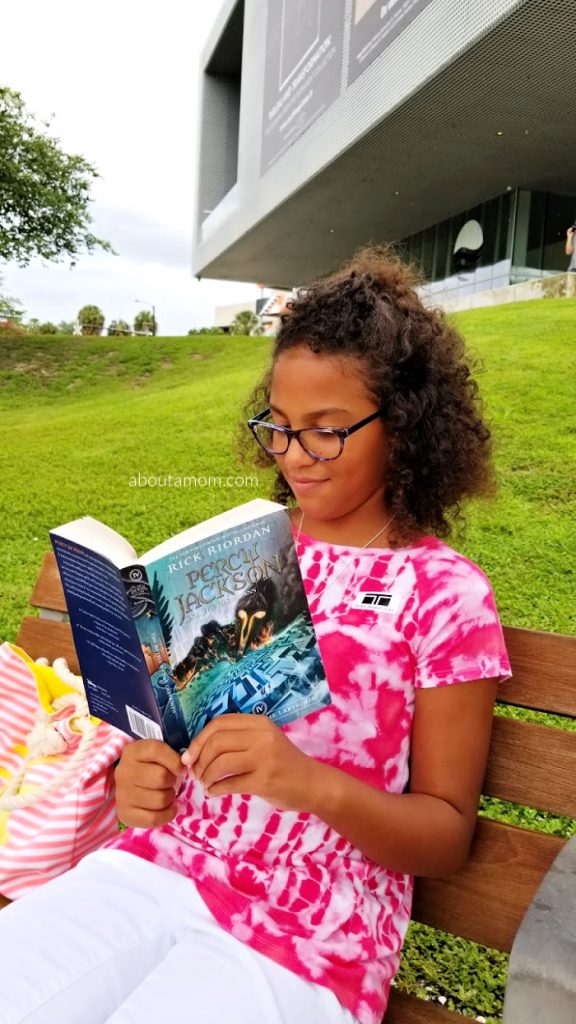 It’s been a lot of fun planning activities around the books. Like Percy’s mom, I prepared some special blue snacks for T to munch on while reading.  We had a double feature movie night and watched both of the movies that were inspired by the Percy Jackson & the Olympians series. We even made a super fun outdoor reading nook.

Not only has T loved reading these books, but they have left her wanting to learn more about Greek mythology, so last week we visited the Tampa Museum of Art where they have an incredible collection of Greek and Roman Classical Antiquities. When we visited the museum, we were well into the fourth book of the series, Percy Jackson & the Olympians: The Battle of the Labyrinth. Much like the preceding books, this one is full of humor and heart-pounding action. It’s Percy and his friends’ most thrilling adventure we have read to date. 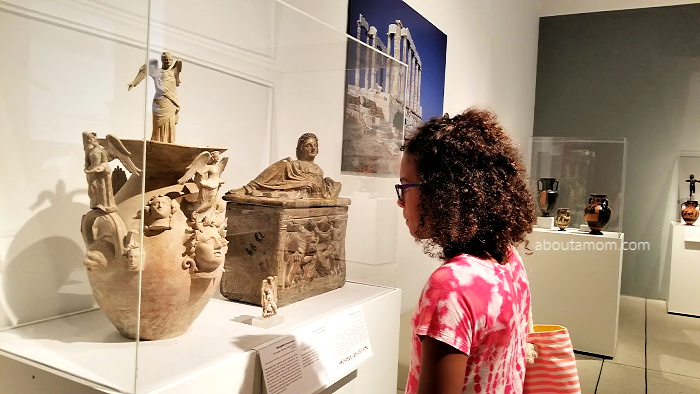 We’re just starting on the fifth and final novel of the series (Percy Jackson & the Olympians: The Last Olympian) with T’s first day of middle school just two weeks away. Yikes! It has been such a busy and mostly fun summer for us.

When reading the Percy Jackson & the Olympians series with your child, I encourage you to find a Greek and Roman art exhibit to check out. Before reading these novels, T would have most likely been bored out of her mind visiting a museum like this. Since she was eager to learn more about Greek mythology and the Greek gods, that wasn’t the case at all. 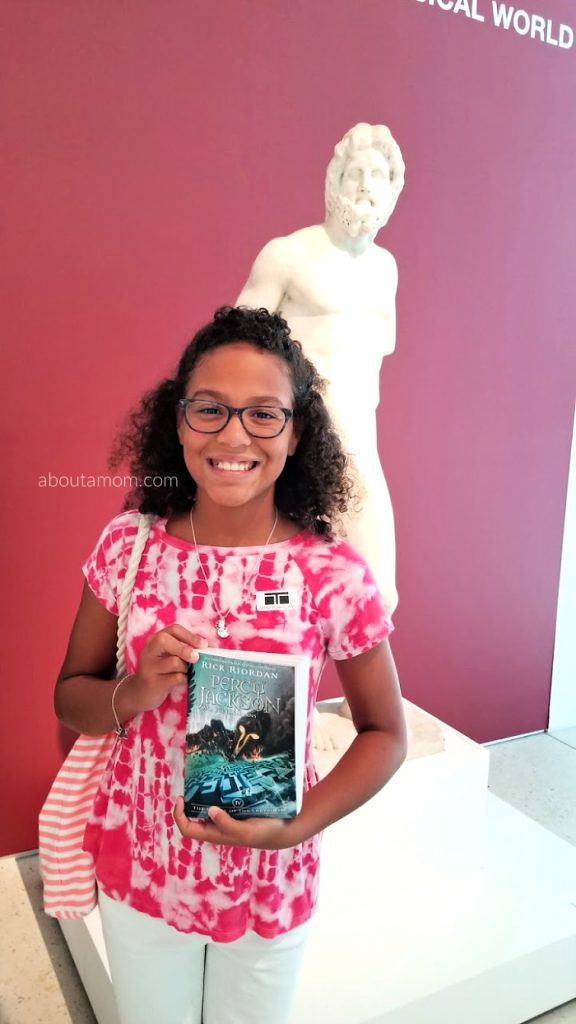 Upon entering the Classical Antiquities Gallery we were greeted by a nearly life-sized marble statue of Poseidon. If you haven’t read the Percy Jackson series yet, Poseidon is Percy’s dad, so this was an awesome surprise and great way to start our afternoon at the museum. The marble statue is Roman and from the 1st century A.D. It is sadly missing Poseidon’s legendary trident or fork, but you can see where it has broken off from the hand over time.

Another notable piece was a life-sized torso of Aphrodite discovered by Gavin Hamilton in 1771. 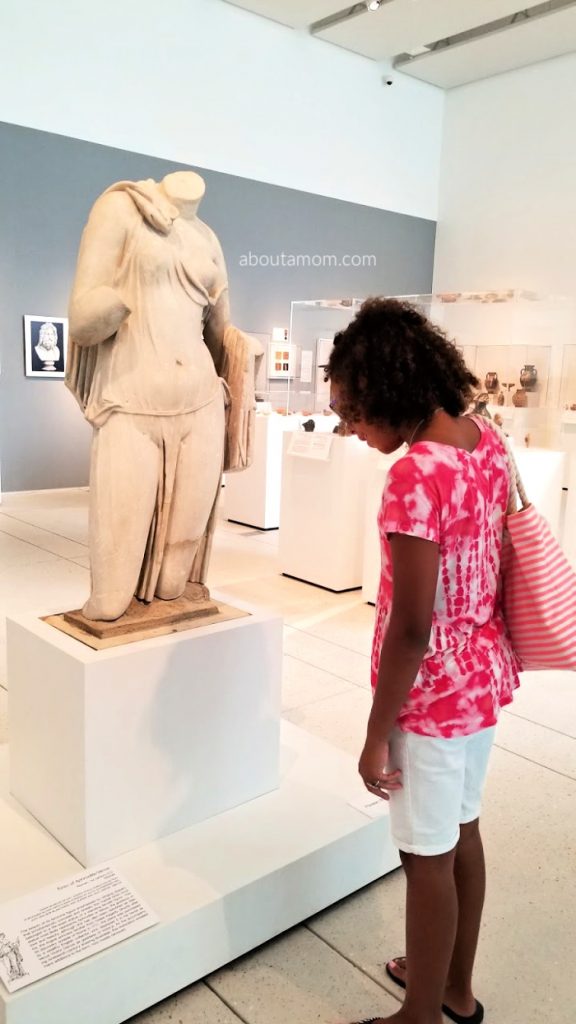 We were quite taken by this beautiful marble Head of Athena, the goddess of war, wisdom, and craft. 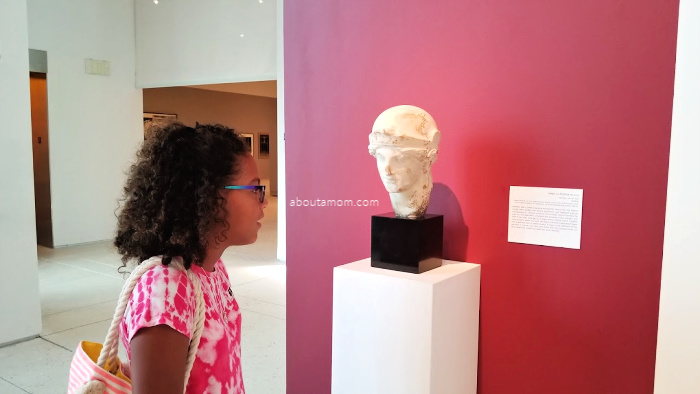 Reading-related field trips like this are a terrific way to keep kids excited about books. It was really neat to see my daughter eager to learn more about Greek mythology. She stopped and read about each piece in the gallery.

Watching her connect the dots back to what she has read in the books, and then to go on and learn even more at the museum, was so fun. I really appreciate how the Percy Jackson  series has helped my daughter learn about something new in a really different, engaging, and interactive way. 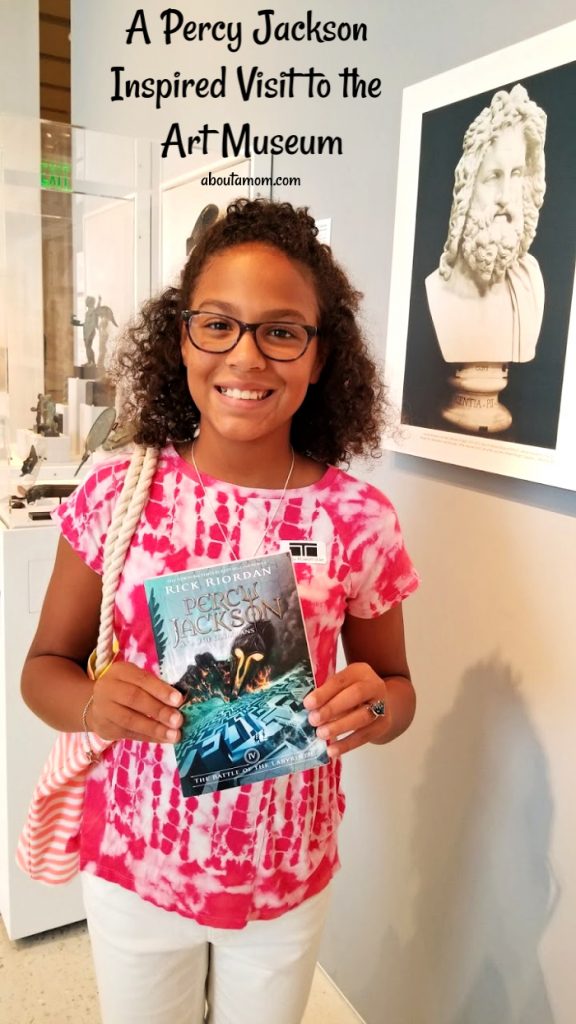 Rick Riordan’s fun, fast-paced Percy Jackson series is perfect for kids ages 9-12 who love monsters, mythological heroes, and adventure. The series follows the adventures of 12-year-old Percy as he learns he is a demigod (half mortal, half Greek god) and the son of Poseidon, the god of the sea, whom he has never met. In the first book, Percy and his friends Annabeth and Grover spend time training at Camp Half-Blood and then find themselves with no choice but to set out on a dangerous quest to recover a stolen weapon of mass destruction — Zeus’ master lightning bolt.

In addition to all the adventure, mystical creatures and Greek mythology, there is an underlying story about Percy coming to terms with the father he has never known that is very heartwarming. There are also some valuable lessons about friendship. All in all, this has been a very fun series for us both to read, and it is right on par with T’s reading level going into the sixth grade.

It has been a great summer of reading for us. What tips do you have to keep your kids reading?