Disney Book Group is partnering with me for a giveaway to celebrate the release of The Fire Keeper (A Storm Runner Novel, Book 2) by J.C. Cervantes. Gather your middle-grade readers and get ready for a brand new quest featuring incredible twists and turns. The fiery and fast-paced sequel to the New York Times bestselling and critically acclaimed The Storm Runner is in stores today!

My 11-year-old and I are so excited about this latest book from Rick Riordan Presents. Last fall we devoured The Storm Runner and over summer break we read the best-selling Percy Jackson & the Olympians series. We are only a few chapters into The Fire Keeper but can already tell it is going to be a terrific adventure.

The Fire Keeper reunites some familiar characters from the first book, along with some exciting new characters including gods and monsters from both ancient Maya and Aztec mythology. 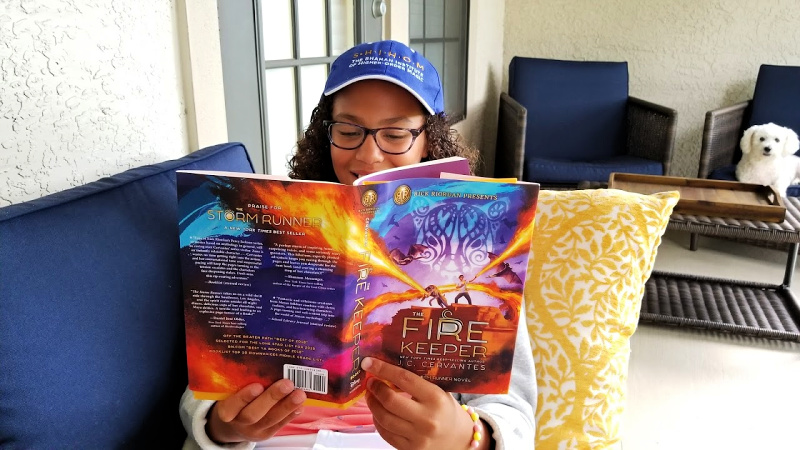 About The Storm Runner Series

A contemporary adventure based on Maya mythology from Rick Riordan Presents! In Book 1, The Storm Runner, a lonely boy in New Mexico has a physical disability that makes middle school feel even more like everyone is watching him. But as he soon learns, his physical differences are merely the first clue to a family history that connects him to the Maya gods—and puts him in mortal danger.

About The Fire Keeper

Zane Obispo’s new life on a beautiful secluded tropical island, complete with his family and closest friends, should be perfect. But he can’t control his newfound fire skills yet (inherited from his father, the Maya god Hurakan); there’s a painful rift between him and his dog ever since she became a hell hound; and he doesn’t know what to do with his feelings for Brooks.

One day he discovers that by writing the book about his misadventures with the Maya gods, he unintentionally put other godborn children at risk. Unless Zane can find the godborns before the gods do, they will be killed. To make matters worse, Zane learns that Hurakan is scheduled to be executed. Zane knows he must rescue him, no matter the cost. Can he accomplish both tasks without the gods detecting him, or will he end up a permanent resident of the underworld?

In this cleverly plotted sequel to The Storm Runner, the gang is back together again with spirited new characters, sneaky gods, Aztec royalty, unlikely alliances, and secrets darker than Zane could ever have imagined. Secrets that will change him forever. 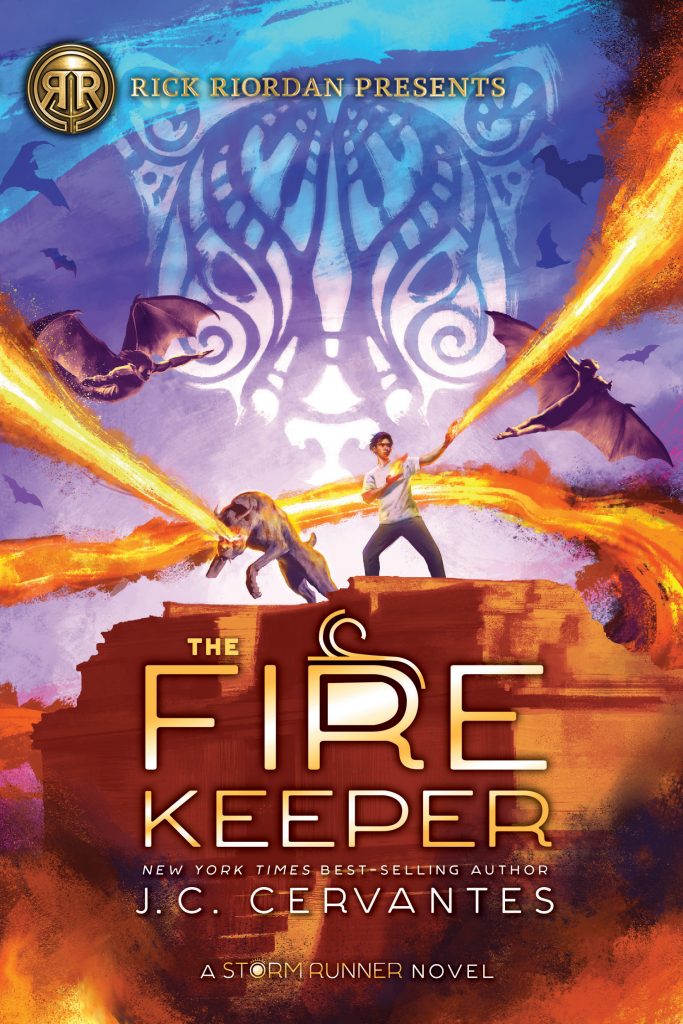 J. C. Cervantes is the New York Times best-selling author of The Storm Runner, which Booklist called “a rip-roaring adventure” in a starred review. Her first novel, Tortilla Sun, was a 2010 New Voices pick by the American Booksellers Association and was named to Bank Street’s 2011 Best Book List. Jen grew up in San Diego and was fascinated by stories about Maya gods and magic. 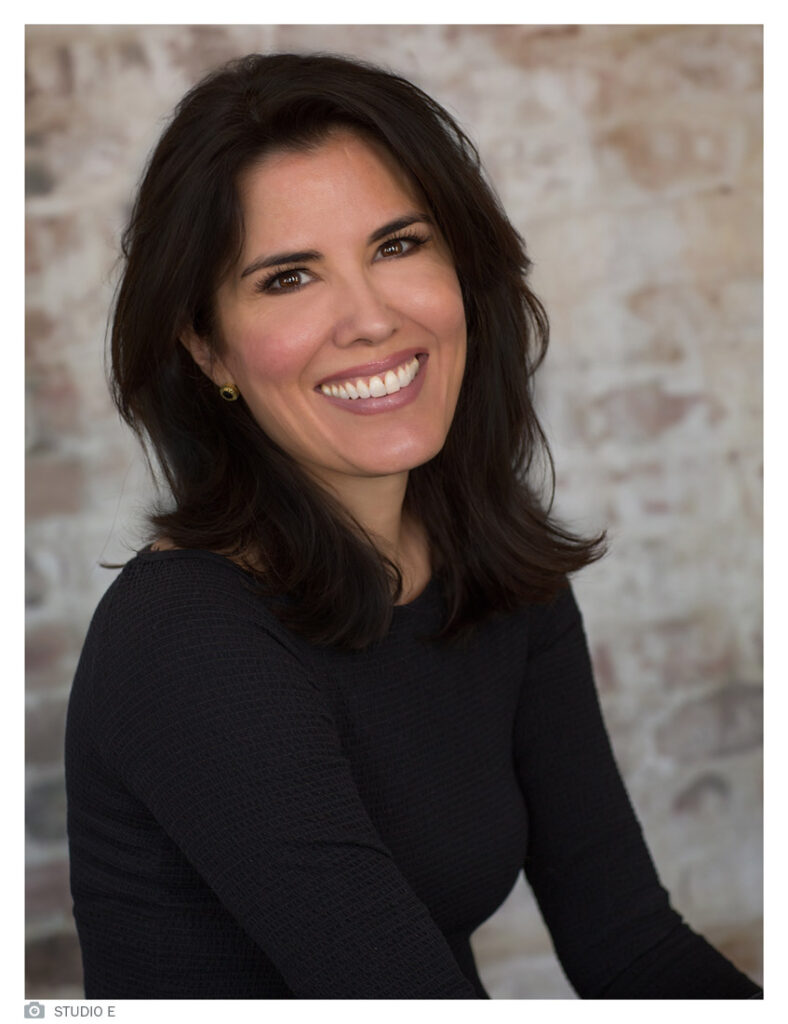 The Rick Riordan Presents imprint is dedicated to providing entertaining middle grade fiction based on various world mythologies. Rick Riordan is involved in the selection, editing, and promotion of these books, working with great authors to tell exciting stories inspired by the mythologies of their own heritages. Learn more about the imprint and its current and upcoming titles on their official site. 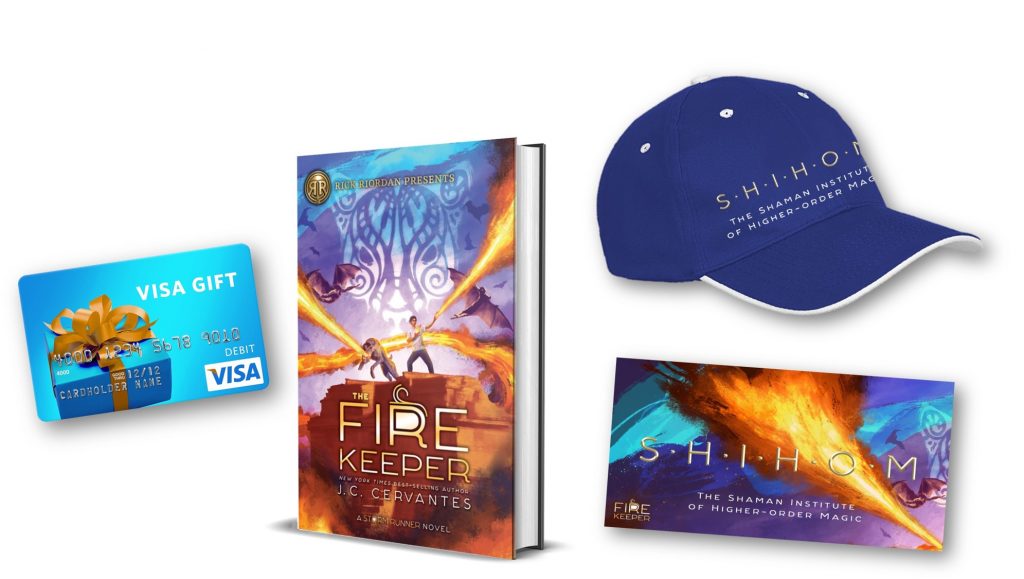 Ease back into the school year with a good book. Enter for your chance to win:

a copy of The Fire Keeper,
branded baseball cap & bumper sticker,
plus a $100 Visa gift card to stock up on a fresh wardrobe.

Giveaway open to US addresses only.
Prizing and samples provided by Disney Book Group.
Giveaway ends on September 18, 2019 at midnight. One random winner will be selected from comments.

Be sure to enter this $50 Visa Gift Card Reader Appreciation Giveaway too!