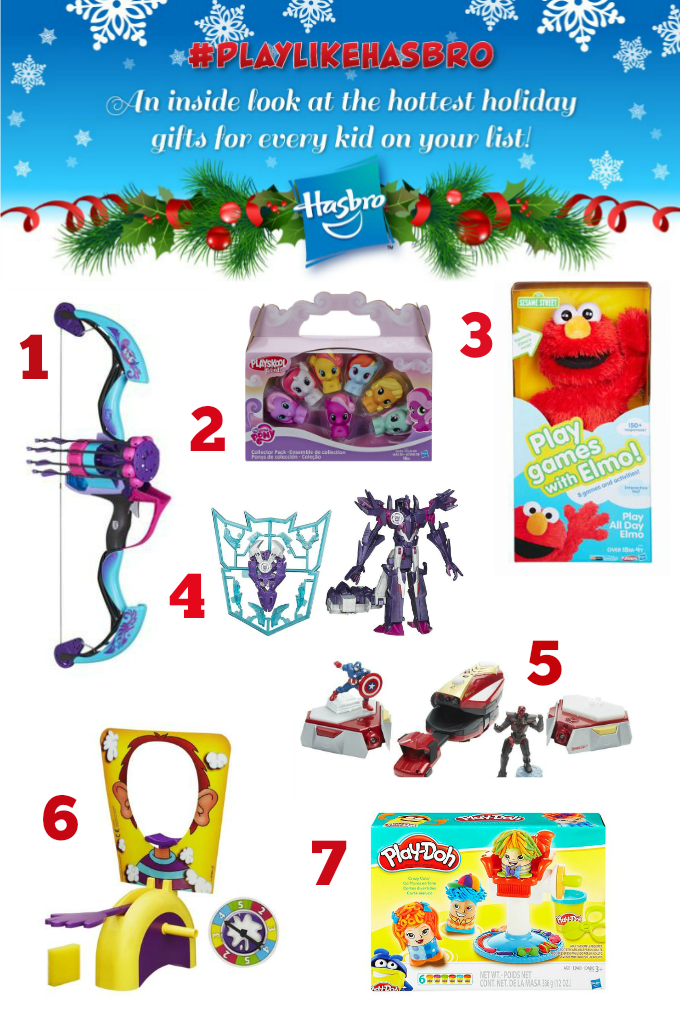 Hasbro has the most awesome toys this holiday season! I’m so excited to partner with Hasbro to share some of this holiday season’s hottest toys. Hasbro generously sent me some fantastic toys that I was able to donate to our local toy drive. It felt so good playing Santa earlier this week.

You’ll want to keep an eye out for some of these toys, while you’re out finishing up your holiday shopping. They are available at most major retailers. You can also shop online at HasbroToyShop.com. I ended up doing the majority of my holiday shopping online this year. How about you?

Hasbro’s Hottest Toys for Every Kid On Your List

3. Play All Day Elmo (Ages 18 months & Up)
Kids will be wowed by the most exciting and playful Elmo to date, the PLAY ALL DAY ELMO toy! This favorite pal features 150+ responses and eight games and activities that will keep little ones laughing. From “Pat-a-cake” and “Freeze Dance.” to “Red Light, Green Light” and more, every move kids make is a new chance for fun. Little ones can also tickle Elmo’s belly, hold his hand, give him a kiss, or clap his hands to play games together and hear more fun responses! Requires AA batteries, demo batteries included.

4. TRANSFORMERS ROBOTS IN DISGUISE MIN-CON DEPLOYERS (Ages 5 & UP)
Pick a side and choose a warrior: AUTOBOT DRIFT or DECEPTICON FRACTURE. Your Airazor figure is a small but mighty fighter who converts in 1 step from covert mode to warrior mode with a terrifying blade attack. But his Decepticon Fracture buddy is a Mini-Con Deployer who can launch Airazor into battle whether he’s in robot mode or vehicle mode! With these Decepticon fighters working together, Autobots don’t stand a chance!

5. PLAYMATION MARVEL’S AVENGERS STARTER PACK (Ages 6 & Up)
Enter the world of Marvel’s Avengers with the PLAYMATION MARVEL’S AVENGERS STARTER PACK. STARTER PACK includes Repulsor Gear, two Power Activators, CAPTAIN AMERICA SMART FIGURE and IRON SKULL SMART FIGURE. With the Playmation Marvel Avengers Starter Pack, players have the core products they need to carry out their first missions and fight alongside the Avengers in the battle to defend Earth from Ultron! Four locations and 25 missions are playable out of the box, with additional locations and missions available through the free-to-download AvengersNet app.

6. PIE FACE Game (Ages 5 & Up)
The PIE FACE Game is a simple to play game that brings friends and family together for laugh out loud moments! Players load the arm with whipped cream (not included) or the included sponge and take turns sliding their head through the mask and spinning the spinner. Turn the handle the number of times indicated on the spinner and the tension on the arm will build — suddenly someone will be surprised with a face full of whipped cream! The PIE FACE Game includes the throwing arm, chin rest, splash guard mask, spinner and sponge.