It’s winter time, which means cold weather and comfort foods. On the coldest of days — those oh-so-cold days that make your teeth chatter when you step outdoors — my family likes to stay inside to watch movies and play our favorite board games. These are the days that call for some really delicious snacks like Loaded Tater Tots.

Speaking of Totchos, have you seen my Buffalo Chicken Totchos recipe? It’s TO DIE FOR!

Loaded Tots are also the perfect game-day food. I love making this on Football Sunday. Another great snack for game day is Sheet Pan Nachos. The secret to the best nachos is in the sauce! Nom. Nom. Nom.

See how easy it is to make these loaded tots:

If it is game-day grub you are looking for, be sure to also check out these recipes for homemade Hot Dog Chili, Slow Cooker Root Beer Pulled Pork Sandwiches, and Easy 4-Layer Dip.

Does It Have To Be Tots?

Nope! Because potatoes are so versatile, you can substitute pretty much any form of them in this recipe. The tots work well though because they are easy to share and snack on. Of course, you could go with french fries if they’re more your speed. You could even try using hash browns, which are pretty much larger, flatter versions of tater tots. You could dress each hash brown individually. And yes, if you’re a traditionalist, you can apply the same toppings to a jacket potato, though that would create more of a side dish than something snacky.

That’s a lot of bacon. Do I need to include all of it?

The original KRAFT Recipe on SamsClub.com calls for 4 slices of Oscar Mayer Bacon, but my family really like bacon, A LOT, so I added a bit more. Their ratio of sour cream and dressing is a little different than my own, as well. I bumped up the ranch ratio a bit since my family like it so much.

Can I use chives instead of parsley?

I had intended to use fresh chopped chives like the original recipe calls for. I usually do, but I forgot to pick some up for the store. Parsley is a great substitute if you don’t have chives. Just use whatever herbs you have on hand.

How do I prevent the cheese from sticking to the pan?

I recommend using Parchment paper to line the pan. Cleaning up baked-on cheese is difficult. Why waste the elbow grease.

How do I make my tots extra crispy?

Spray the tots with cooking spray or brush them lightly with oil before putting them in the oven.

Can I use a different kind of cheese?

Of course! I prefer cheddar but you can use whichever kind you want. Monterey jack would work well.

How To Store Loaded Tater Tots

You can keep the tots refrigerated in an airtight container for 3-4 days. Or you can freeze them by putting them in an airtight container then placing that container in a bag. They should keep for up to 3 months. When you want to eat them, thaw them in the fridge overnight or on the ‘defrost’ setting on your microwave. Then warm them in the oven on 350 F for 10-15 minutes. You can also warm them up in a pan on the stovetop on a medium temperature.

Be sure to try these other delicious recipes: 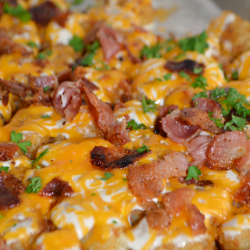 About a Mom
4.84 from 12 votes
Print Recipe Pin Recipe