I can promise you one thing. After seeing Pixar’s newest short film The Blue Umbrella, you will never view a rainy day the same again. The Blue Umbrella animated short will be playing before Monsters University, opening in theaters on June 21, 2013. Make sure you arrive early, because you won’t want to miss the magic of this film.

A chat with director Saschka Unseld, during a recent press trip, revealed that The Blue Umbrella is 100% animation. You might be wondering what the big deal is about that, after all isn’t that what Pixar is known for?But trust me when you see the animated short this little tidbit of information will be astounding. I watched the short thinking that it was a blend of animation and actors, and after seeing the film twice now am still shaking my head in disbelief. It’s quite remarkable.

I was captivated from the moment the first rain drop hit the ground.

There are two themes intertwined as the title character strives to meet the red umbrella, but more than that it’s about how a city comes to life when it rains. There are faces to be found everywhere in the city. I don’t want to say too much and give away the film, but like I said earlier you will be looking at things a little differently after watching The Blue Umbrella.

While in San Francisco, I had a chance to sit down with The Blue Umbrella Director Saschka Unseld and a group of bloggers for some Q&A. 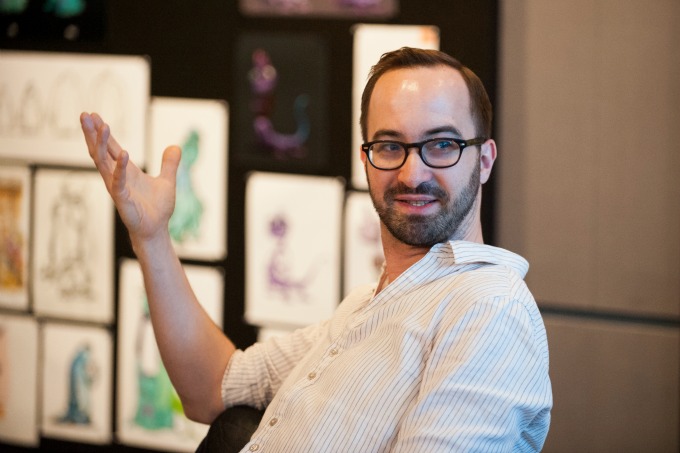 Generally on every movie that comes out, there’s new technical innovations that are being used. Especially with the short films, you can test something out without putting into jeopardy the production schedule of a feature, which is kind of nice. If you don’t hit the theatrical release date there, that’s a bigger problem.

A lot of it was just approaching it creatively differently. As a hobby, I’ve done photo series on this. I love details in reality. Like for a fan I did a photo series of just sidewalk asphalt plates, and the 3 way cracks out there, and in some areas there’s more kind of these black dots from chewing gums, and on the side there’s something from a tree which probably stands 10 meters down the street.

And just the complexity and the beauty of all these details you can see in the city. And a lot of it was me and the team going on trips into the city and looking at all these details, like, on the side of a newspaper box there’s streaks of probably someone tying their shoelace, and then you have the streak of the black rubber from the shoe there.

Or the way these things are moved around has a certain way. There’s scratches on them. Everything kind of tells a story to it. And a big, big struggle in the beginning was getting people to change how they work. Like, it was amazing how much people are used to doing things in a more stylized, cartoony way.

Another question for Unseld was what city is the film based on?

Unseld told us there is clearly New York, because he went on two trips there to take photos. There are some characters, from the city of San Francisco. The the very first character on the sidewalk we called her Lisa. They actually have all names because you couldn’t say, like, you know that weird metal thing in the 15th shot? Lisa is two blocks down from where I live. So that’s from San Francisco. I looked through all the photos I had done from Paris, and there is the building in the film where you see just the rooftop with two windows being the eyes, and then the rain pipe being the mouth. That’s a building, um, in Paris. So I think it’s mostly New York, San Francisco, and then a bit of sprinkled stuff.

Where did the story come from?

I was living here (San Francisco) already since, like, four years or something like this. And it really rarely rained. And then finally it was raining. And I went for a walk through the city, and I saw an umbrella someone had thrown away on the side of the street. I took a picture of it. On the Tumblr blog I have, the first post of that is that photo I had taken. I had this weird, incognito blog called Rainy City Tales on Tumblr that I actually was running during the production. That picture stuck with me and, and I was thinking about stories I wanted to tell. It’s this weird thing. You see this umbrella and it’s just an object, but it looks so sad, and it looks kind of so down and drenched and, some of the ribs are sticking out, and it it’s a super sad sight. I wanted to tell a story with that.

I thought about first the umbrella wants to get back to the owner, and it’s kind of a break-up story, like, someone broke up with you and you still want to be with that person, and I couldn’t find a happy ending to that, sadly. I abandoned that story, and then it became, the owner wants to move to somewhere where it never rains, and the umbrella doesn’t want to, but I couldn’t find a happy end for that either. And then I was thinking of why do I like the rain so much? And it became me thinking about where I grew up it rains much more than here. And I really like cities in the rain a lot. I think they become beautiful like in Hamburg, in Germany.

Synopsis: It is just another evening commute until the rain starts to fall, and the city comes alive to the sound of dripping rain pipes, whistling awnings and gurgling gutters. And in the midst, two umbrellas—one blue, one not—fall eternally in love.

Be sure to check out The Blue Umbrella when you see Monsters University in theaters starting on June 21st!

All-expense paid press trip provided by Disney/Pixar. No compensation was received. Opinions are mine.